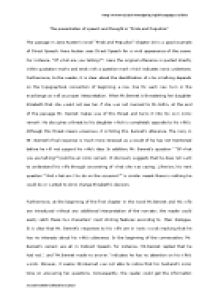 The presentation of speech and thought in Pride and Prejudice

﻿w**g Wenwen Q32103 Investigating English Language: Stylistics The presentation of speech and thought in ?Pride and Prejudice? The passage in Jane Austen?s novel ?Pride and Prejudice? Chapter 20 is a good example of Direct Speech. Here Austen uses Direct Speech for a vivid appearance of the scene. For instance, ?Of what are you talking???. Here the original utterance is quoted directly within quotation marks and ends with a question mark which indicates ironic undertone. Furthermore, to the reader, it is clear about the identification of who is talking depends on the typographical convention of beginning a new line for each new turn in the exachange as well as proper interpretation. When Mr.Bennet is threatening her daughter Elizabeth that she would not see her if she was not married to Mr.Collin, at the end of the passage Mr. Bennet makes use of this threat and turns it into his own ironic remark. He also gives a threat to his daughter which is completely opposite to his wife?s. Although this threat means unserious, it is foiling Mrs. Bennet?s utterance. The irony in Mr. Bennet?s final response is much more stressed as a result of he has not mentioned before he will not support his wife?s idea. ...read more.

In the beginning of the passage, the first sentence ?The contents of this letter threw Elizabeth into a flutter of spirits, in which it was difficult to determine whether pleasure or pain before the greatest share.?is reported by the narrator. However, it is expressing Elizabeth?s emotion with the phrase ?flutter of spirits?, which stressing the conflict in her mind. At the end of the novel ?Pride and Prejudice?, Elizabeth is aware of her prejudices and misunderstanding about Darcy. Nevertheless, during the course of the story Elizabeth is not conscious of her thoughts and feelings are changing. Therefore, the passages are presented in Free Indirect Thought is a good way to see the character Elizabeth has a great improvement. It seems giving the reader an opportunity to look into Elizabeth?s thoughts while she is unaware of. Consequently, the reader could learn about the change of Elizabeth?s thought before herself. Finally, when she is conscious of the danger that she may have lost the chance of being together with Darcy, she reaches the same level as the reader. It could be seen as the following sentence ?and never had she so honestly felt that she could have loved him, as now, when all love must be vain.? The other example is when the first time Elizabeth meets Lady Catherine, the portrayal of the woman is certainly described with her impression. ...read more.

"It is more than I engage for, I assure you."(Austen Chapter1) "Let me first see how he behaves," said she; "it will then be early enough for expectation." [?] Darcy, after enquiring of her how Mr. and Mrs. Gardiner did, -- a question which she could not answer without confusion -- said scarcely anything. He was not seated by her; perhaps that was the reason of his silence; but it had not been so in Derbyshire. There he had talked to her friends, when he could not to herself. But now several minutes elapsed without bringing the sound of his voice; and when occasionally, unable to resist the impulse of curiosity, she raised her eyes to his face, she as often found him looking at Jane as at herself, and frequently on no object but the ground. More thoughtfulness, and less anxiety to please than when they last met, were plainly expressed. She was disappointed, and angry with herself for being so. "Could I expect it to be otherwise!" said she. "Yet why did he come?" She was in no humour for conversation with any one but himself; and to him she had hardly courage to speak. She inquired after his sister, but could do no more. [?] "The first wish of my heart," said she to herself, "is never more to be in company with either of them. ...read more.