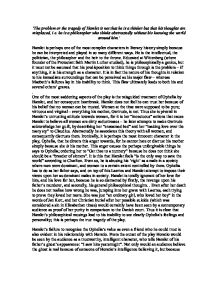 The problem or the tragedy of Hamlet is not that he is a thinker but that his thoughts are misplaced, i.e. he is a philosopher who thinks abstractedly without his knowing the world around him.

'The problem or the tragedy of Hamlet is not that he is a thinker but that his thoughts are misplaced, i.e. he is a philosopher who thinks abstractedly without his knowing the world around him.' Hamlet is perhaps one of the most complex characters in literary history simply because he can be interpreted and played in so many different ways. He is the intellectual, the politician, the philosopher and the heir to the throne. Educated at Wittenberg (where founder of the Protestant faith Martin Luther studied), he is philosophically a genius, but it must not be assumed that his predisposition to think things through is the problem - if anything, it is his strength as a character. It is in fact the nature of his thoughts in relation to his immediate surroundings that can be perceived as his major flaw - whereas Macbeth's failures lay in his inability to think. This flaw ultimately leads to both his and several others' graves. . One of the most saddening aspects of the play is the misguided treatment of Ophelia by Hamlet, and her consequent heartbreak. Hamlet does not feel he can trust her because of his belief that no woman can be trusted. Women at the time were supposed to be pure; virtuous and virginal - everything his mother, Gertrude, is not. Thus she is pivotal in Hamlet's untrusting attitude towards women, for it is her "incestuous" actions that cause Hamlet to believe all women are dirty seductresses - he later attempts to make Gertrude acknowledge her guilt, by describing her "enseamed bed" and her "making love over the nasty sty" to Claudius. ...read more.

A contemporary audience would certainly have found this incredibly ironic, considering the constant questioning of things like life, such as "To die, to sleep...who would bear the whips and scorns of time?" which are followed by impulsive and ill-judged actions. Worse still, Hamlet is so focussed upon the question of avenging Claudius that he shows no remorse for his actions, merely using it to question his mother over his father's death - "A b****y deed. Almost as bad, good mother, as kill a king and marry with his brother." Charlton explains that Hamlet has created "his ideal world" and then mistakes it "for a true intellectual projection of the real one." This is clearly why his actions do not match up with his thoughts and is seemingly unaware of the hurt he is causing, for he knows the "universe better than the little world of which he is bodily a part." Hamlet's theoretical questioning, although harmless when it doesn't affect his actions in reality, causes him to commit the "wrong action for the actual world in which Hamlet must live." Furthermore, Hamlet's constant and determined attempts to ensure both his mother's and stepfather's guilt, by staging a play of the murder and this questioning of Gertrude, can be seen as stalling, and would certainly have irritated the audience. In fact, the ghost of the dead king voices these thoughts in this scene, by reappearing and reminding Hamlet of his "blunted purpose". Even when Hamlet is presented with the perfect opportunity to kill Claudius he falters, giving the reason that "I, his sole son, do this same villain send to heaven" because Claudius at this moment is praying. ...read more.

It is rightly assumed by Jan Kott that "he has been trapped into finding himself in a compulsory situation; a situation he does not want but which has been thrust upon him." The situation he finds himself in, perhaps because of his father seeking revenge, because of his murderous uncle, his incestuous mother and the very "rotten" country he lives in, accelerates his previous disposition to analyse and question every detail of life. We can only assume that the Hamlet before the beginning of the play was an abstract thinker, and the traumatic events that immediately precede the commencement of the play and those within it merely unbalance him characteristically. This imbalance might also be hereditary, for his mother is very unbalanced in an emotional sense, having a "divided heart" where Hamlet has a divided mind. Gertrude is divided between her husband and her son, whereas Hamlet finds himself choosing between his loyalty to his father and his morals. His character thus helps to absorb him in the corrupt power struggle in which no one can "to thine own self be true". However, the division itself and its consequences are "thrust upon him" and thus Hamlets philosophical thinking, though leading to his ignorance of the events occurring in front of his very eyes, has been put to its extremities (i.e. applying it to everything) through the actions of Claudius, Gertrude and his father. Shakespeare therefore is pointing out how a corrupt court can cause the downfall of worthy individuals, and of course he is alluding to the English court in this. ...read more.