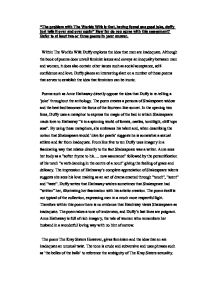 "The problem with The Worlds Wife is that, having found one good joke, duffy just tells it over and over again" How far do you agree with this assessment? Refer to at least two or three poems in your answer. Within The Worlds Wife Duffy explores the idea that men are inadequate. Although the book of poems does unveil feminist issues and coveys an inequality between men and women, it does also contain other issues such as social acceptance, self-confidence and love. Duffy places an interesting slant on a number of these poems that serves to establish the idea that feminism can be ironic. Poems such as Anne Hathaway directly oppose the idea that Duffy is re-telling a 'joke' throughout the anthology. The poem creates a persona of Shakespeare widow and the best bed becomes the focus of the fourteen-line sonnet. ...read more.

Duffy writes that Hathaway wishes sometimes that Shakespeare had "written" her, illustrating her fascination with his artistic creation. The poem itself is not typical of the collection, expressing men in a much more respectful light. Therefore within this poem there is no evidence that Hatchway views Shakespeare as inadequate. The poem takes a tone of tenderness, and Duffy's last lines are poignant. Anne Hathaway is full of rich imagery, the tale of women who remembers her husband in a wonderful loving way with no hint of sorrow. The poem The Kray Sisters However, gives feminism and the idea that en are inadequate an unusual twist. The tone is crude and subversive and uses phrases such as 'the belles of the b***s' to reference the ambiguity of The Kray Sisters sexuality. ...read more.

The poem 'Little Red Cap' however, supports the idea that, having found one jokes Duffy re-tells it throughout the anthology. Little red cap successfully introduces themes that are present throughout most of the collection, sexuality and male inadequacy are expressed within most of the poems, and little red cap is no exception. The poem presents men as weak and pathetic, much like 'Thetis', which shows men, can be overpowering and possessive. Throughout the poem, the woman is trying to escape the male figure, changing and conforming to many different animals in order to flee him, but all is in vein 'I shrank myself to the size of a bird in the hand of a man. Sweet, sweet was the small song that I sang, till I felt the squeeze of his fist' this portrays the male figure as possessive and dominating. These poems in particular prove to a certain extent that the assessment of the anthology is true. ...read more.