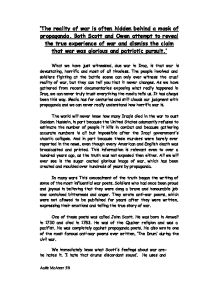 'The reality of war is often hidden behind a mask of propaganda. Both Scott and Owen attempt to reveal the true experience of war and dismiss the claim that war was glorious and patriotic pursuit.'

'The reality of war is often hidden behind a mask of propaganda. Both Scott and Owen attempt to reveal the true experience of war and dismiss the claim that war was glorious and patriotic pursuit.' What we have just witnessed, due war in Iraq, is that war is devastating, horrific and most of all timeless. The people involved and soldiers fighting at the battle scene can only ever witness the cruel reality of war, but they can tell you that it never changes. As we have gathered from recent documentaries exposing what really happened in Iraq, we can never truly trust everything the media tells us. It has always been this way. Media has for centuries and still clouds our judgment with propaganda and we can never really understand how horrific war is. The world will never know how many Iraqis died in the war to oust Saddam Hussein, in part because the United States adamantly refuses to estimate the number of people it kills in combat and because gathering accurate numbers is all but impossible after the Iraqi government's chaotic collapse. And in part because these murders were barely ever reported in the news, even though every American and English death was broadcasted and printed. This information is relevant even to over a hundred years ago, as the truth was not exposed then either. ...read more.

He was born on March 18, 1893. He was teaching on the Continent until he visited a hospital for the wounded and then decided, in September 1915, to return to England and enlist in the army. Owen was injured in March 1917 and sent home; he was fit for duty in August 1918, and returned to the front. November 4, just seven days before the Armistice, he was caught in a German machine gun attack and killed. He was twenty-five when he died, but is still known as the writer of one the most powerful war poems ever written; Dulce Et Decorum Est. The first stanza of 'Dulce Et Decorum Est' is very quiet. He showed this by using words such as 'deaf' and describing 'gas-shells dropping softly behind'. Owen wrote this stanza using the words 'we' and 'our', showing that Owen was involved in the war and this incident. We see that the soldier's main aim is to get to safety, and not to defend their country, as they are numb with the experience of the war. We see that they are 'marching asleep', so they are vulnerable to attacks, and are not ready to defend themselves, as they are 'drunk with fatigue'. Punctuation is constantly used to make the stanza seem longer, and to extend the pauses between the lines. ...read more.

Are you, my laddie?' to encourage readers and make the poem seen more upbeat and casual, although at the end of each stanza she asks a question which implies that a man is a coward and disloyal to his country if he does not enrol. This use of manipulation resulted in many reluctant men going off, leaving their families and homes, to fight in a war that many of them didn't even believe in. The sight of some of these mindless poems led to other poets writing about other ways in which the government encouraged men. I think that Wilfred Owen's account of portrayal of war in 'Dulce Et Decorum Est' is more effective in exposing the reality of war, as he himself played a role in it. He was able to tell us first hand about the death of one of his fellow soldiers. Although I do feel that Scott's poem was effective as it criticized the government's lies in propaganda. He also showed that war is not about 'charms','tawdry lace' and 'glittering arms', but more about suffering, pain and death. As we can see both these poems have a clear image of war, and the effects of war, even though they were writing over a hundred years apart. This is evidence that even today, especially in places like America and England, concerning the war on Iraq, we are manipulated by propaganda. And many people do still believe the old lie; Dulce et decorum est Pro patria mori. Aoife McAteer 5B ...read more.