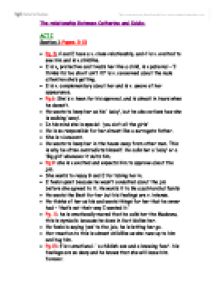 The relationship Between Catherine and Eddie.

The relationship Between Catherine and Eddie: ACT I Section 1: Pages: 5-15 * Pg. 5: C and E have a v. close relationship, and C is v. excited to see him and is v.childlike. * E is v. protective and treats her like a child, is v.paternal - 'I thinks its too short ain't it?' is v. concerned about the male attention she's getting. * E is v. complementary about her and is v. aware of her appearance. * Pg.6: She's v. keen for his approval, and is almost in tears when he doesn't. * He wants to keep her as his ' baby', but he also notices how she is walking 'wavy'. * In his mind she is special- 'you ain't all the girls' * He is so responsible for her almost like a surrogate father. * She is v.innocent. * He wants to keep her in the house away from other men. This is why he often contradicts himself. He calls her a 'baby' or a 'Big girl' whenever it suits him. * Pg.9: she is v.excited and expects him to approve about the job. * She wants to repay B and E for taking her in. * E feels upset because he wasn't consulted about the job before she agreed to it. He wants it to Be a patriarchal family * He wants the Best for her but his feelings are v. ...read more.

Section 6: pages 36-41 * Pg.36: E glances at C in disbelief of whatever has just been said. She protects her Rudi by saying that it is true. * E's v.aggressive. His resentment of Rudi is v. noticeable. * Pg.37: E tries to be jokey about the women in Italy sleeping around but his in fact being quite rude. * When Rudi tries to defend his culture E uses it as a way of explaining himself. * Pg.38: He talks in the third person to make it sound general But he is so obvious Both B and Rudi answer Back referring to Rudi and C. * Marco tries to be co-operative. * Pg.39: C tries to rebel by asking Rudi to dance. Rudi tries to be polite to E and refuses, but B encourages him. * E tries to fight back by asking if it is a new record- implying he has been wasting money. * Pg.40: throughout his speech E is constantly twisting a newspaper which eventually tears. In this speech he tries to prove Rudi is a h********l. * After this speech he Becomes v. friendly, But starts to drop hints that he is a real man- telling B to make his coffee nice and strong. * Pg.41: E then starts to Box Rudi to relieve some of his aggression. ...read more.

* This scene is the total opposite of the start of the play - where everyone was happy; e is now throwing tables at c. * Pg.62: b has always known that e has loved c and to try and stop someone from dying she puts her feelings into words. * Pg.63: e and c are both disgusted. He actually physically cannot hold all these emotions in his head. He has never fully understood his feelings and now that they have been put into words he feels in agony. The idea of him wanting to violate his 'Madonna' breaks every value he has ever held dear. * As in all classical tragedies this is E's moment of recognition. * Death is the only answer so he goes out in defiance calling for his name- the only thing he has left. He knows he is defeated but carries on. * E's feelings for c are so intense he has destroyed himself. Love is usually a positive emotion but when it is so intense and passionate it takes over. * Pg.64: E's death has ruined all their lives. Cathie and Rudi will have to get married with it hanging over them. Marco will go to prison and then back to Italy, b wills b the widow of a horrible man in a neighbourhood that never forgets. * Cath forgives him in his death. * She is so confused in a few moments so much has happened she is guilty, in disbelief and in turmoil. ...read more.