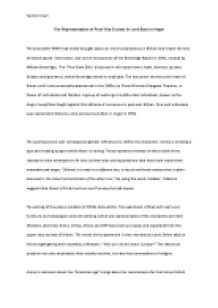 The Representation of Post-war Britain in &quot;Look Back in Anger&quot;.

﻿Yasmin Imani The Representation of Post-War Society in Look Back in Anger The years after WWII had ended brought about an era of complacency in Britain and meant the end of rationing and restrictions, due to the introduction of the Beveridge Report in 1941, created by William Beveridge. The ?Five Giant Evils? discussed in this report were: want, idleness, squalor, disease and ignorance, which Beveridge aimed to eradicate. The document served as the heart of Britain until it was eventually abandoned in the 1980s, by Prime Minister Margaret Thatcher, in favour of individuals and families. A group of working or middle-class individuals, known as the Angry Young Men fought against this attitude of consensus in post-war Britain. One such individual was named John Osborne, who penned Look Back in Anger in 1956. The opening scene uses stereotypical gender references to define the characters. Jimmy is smoking a pipe and reading a paper while Alison is ironing. ...read more.

By presenting the element of Jazz music in the form of Jimmy playing the trumpet, Osborne is exhibiting his attraction for a culture which he believes is truly alive. This is a common theme in several works of mid-twentieth century white English culture, from literature to popular music. Osborne here suggests that black jazz culture is an embodiment of a ?natural? humanity. Jimmy?s anger is a result of not being able to live in such humanity and his trumpet playing is a symbol of his attempt to connect with such a culture. Jimmy reprimands Alison for inviting her friend Helena to stay in their apartment. His outburst towards Alison at the end of act I is extremely vicious, like many of his others. This rant makes clear what Jimmy deems necessary in order to be truly alive. One must suffer as he did when he watched his father die in order to understand what it truly means to live. ...read more.

This part of Act II also allows Osborne to demonstrate Jimmy?s misogynistic viewpoints, some of which it is alleged Osborne personally shared with his character. Jimmy is particularly cruel to older, upper class women. Alison?s mother is the epitome of such a character. Her hiring of a private investigator seems to have been the catalyst for Jimmy?s extreme hatred of all women like her mother. Alison?s father, Colonel Redfern is, perhaps, the play?s most sympathetic character. He is described as a former military man, which suggests his strict rigidity in matters of emotion. ?I didn?t approve of Jimmy at all, and I don?t suppose I ever should,? It implies that the Colonel is fixed in his attitude towards Jimmy and Alison?s relationship. His previous military life, therefore, is meant to be the antithesis to Jimmy?s radical emotional out bursts. The character of Colonel Redfern, Alison's father, represents the decline of and nostalgia for the British Empire. The Colonel symbolizes the softening of the British character. Just as the Colonel is resigned and withdrawn, Osborne is suggesting that British culture and character is resigned and withdrawn in this new American age. ...read more.