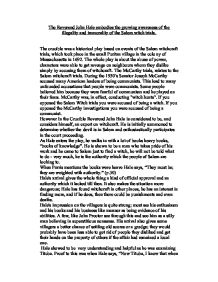 The Reverend John Hale embodies the growing awareness of the illegality and immorality of the Salem witch trials.

The Reverend John Hale embodies the growing awareness of the illegality and immorality of the Salem witch trials. The crucible was a historical play based on events of the Salem witchcraft trials, which took place in the small Puritan village in the colony of Massachusetts in 1692. The whole play is about the abuse of power, characters were able to get revenge on neighbours whom they dislike simply by accusing them of witchcraft. The McCarthy trials, relates to the Salem witchcraft trials. During the 1950's Senator Joseph McCarthy accused many American leaders of being communists. This lead to many unfounded accusations that people were communists. Some people believed him because they were fearful of communism and he played on their fears. McCarthy was, in effect, conducting "witch hunts". If you opposed the Salem Witch trials you were accused of being a witch. If you opposed the McCarthy investigations you were accused of being a communist. ...read more.

Hale's impression on the villagers is quite strong; most see his enthusiasm and his books and his business like manner as being evidence of his abilities. A few, like John Proctor see through this and see him as a silly man believing in superstitious nonsense. His arrival also gives some villagers a better chance of settling old scores or a grudge; they would probably have been less able to get rid of people they disliked and get their hands on the property of others if the affair had remained a local one. Hale showed to be very understanding and helpful as he was examining Tituba. Proof to this was when Hale says, "Now Tituba, I know that when we bind ourselves to h**l it is very hard to break with it. We are going to help you tear yourself free." (p.37). This clearly shows that Hale wants to get some answer's of Tituba but at the same time he wants Tituba to feel comfortable with Him and not be scared. ...read more.

particularly people like Rebecca Nurse, Hale starts to turn from the court and to see the girls as what they are - frauds. This is shown when Hale says to Danforth "Excellency, I have signed seventy-two death warrants; I am a minister of the Lord, and I dare not take a life without there be a proof so immaculate no slightness qualm of conscience may doubt it." (p.80). When Hale says this he means that the girls are being believed too much and there is still no real proof that all these people are working for the devil and should be killed. Hales suspicion increases even more is by the fact that Rebecca Nurse being accused of working for the devil, even though Rebecca Nurse is a good soul and no one would believe that such person would be working for the devil, proof to this is when Proctor says, "I-have no knowledge in that line. But its hard to think so pious a women be secretly a Devil's b***h after seventy years of such good prayer." (p.50). ...read more.