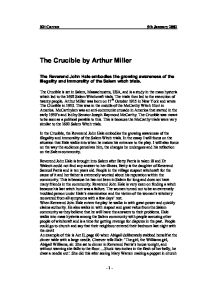 The Reverend John Hale embodies the growing awareness of the illegality and immorality of the Salem witch trials.

Tituba is Parris's female black slave who he brought from Barbados to America. She stands out in the community and has been given a misinterpreted identity because she is black. This is because she is the only one in Salem who is black and stands out from the rest. Hale asks Tituba (Act I page 36): 'Women, have you enlisted these children for the Devil?' Tituba tells Hale that she does not interact with the devil. Abigail starts making up things that have not happened. This makes Tituba get even more upset as she once thought that Abigail was her friend. Abigail tells Hale that 'she sends her spirit on me in church; she makes me laugh at prayer' (Act I, page 36). Hale and Parris believe what Abigail is saying and shout at Tituba even more. It is hard for Tituba with two white men shouting at her and speaking a language she is familiar with. Then Parris says that 'This woman should be hanged! She must be taken and hanged!' This scares Tituba and makes her say what they want her to say. This is that she saw the devil and can now brake away from him. Hale prompts her: 'Then you saw him' (Act I, page 37) ...read more.

At the beginning of the play Hale feels very strong and emotional about finding a witch in Salem. This is the same for the rest of the community. Later on in the play when his sympathies lie with the accused rather that the victims the rest of the community do not agree. It is only the families and close friends of the accused who support his views. The rest of the community think that anyone who is accused is guilty no matter what. Hale thinks at the end of the play that the courts in Salem are immoral and has seen how they have become disillusioned. The rest of the community totally disagrees with this. Danforth tells Hale (Act III, page 75): 'All innocent and Christian people are happy for the courts in Salem' Hale learns from the Salem trials that it is impossible to have a fair trail when dealing with witchcraft. Hale learns this from when Danforth tells him that in a witchcraft trail you can only have the accused and the witness (Act III, page 80): 'an invisible crime, is it not? Therefore, who may possibly be witness to it? The witch and the victim'. This means that it is only the victim's word against the accused and will not be a fair trial This essay supports the statement that the Reverend John Hale embodies the growing awareness of the illegality and immorality of the Salem witch trials. - 1 - ...read more.