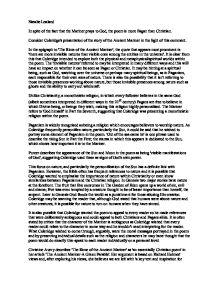 The Rime of the Ancient Mariner-Issues of Paganism and Christianity

In spite of the fact that the Mariner prays to God, the poem is more Pagan than Christian. Consider Coleridge's presentation of the story of the Ancient Mariner in the light of this comment. In the epigraph to 'The Rime of the Ancient Mariner', the quote that appears most prominent is 'there are more invisible natures than visible ones among the entities in the universe'. It is clear from this that Coleridge intended to explore both the physical and metaphysical/spiritual worlds within the poem. The 'invisible natures' referred to may be interpreted in many different ways and this will have an impact on whether it can be seen as Pagan or Christian. It may be hinting at a spiritual being, such as God, watching over the universe or perhaps many spiritual beings, as in Paganism, each responsible for their own area of nature. There is also the possibility that it isn't referring to those invisible presences working above nature, but those invisible presences among nature such as ghosts and the ability to carry out witchcraft. Unlike Christianity, a monotheistic religion, in which every follower believes in the same God (albeit sometimes interpreted in different ways in the 21st century) Pagans are free to believe in which Divine being, or beings they wish, making this religion highly personalised. ...read more.

However, there is also a parallel with the psalms found in the Old Testament of the Bible and also the traditional prayers, which have been passed through generations. One major difference in the history of Paganism and Christianity is the gender used to represent the Divine powers. In Christianity God has generally been accepted as a male presence and Jesus was the Son of God. For centuries the only people accepted as being worthy of preaching God's word were men. In Paganism Goddesses have always formed a prominent part of the religion; indeed, without them, the religion is unlikely to make sense to followers. In The Rime of the Ancient Mariner nature, when personified, is usually portrayed as male. In reference to the Sun the word 'he' is mentioned many times. This emphasis on male characters, especially powerful male characters suggest the poem is more directed towards Christianity than Paganism. The Moon is referred to as a female, but it is never given a powerful role in the poem; it appears to have a merely decorative place in the 'Rime', which doesn't correspond with the dynamic Goddesses found in Paganism. There is one plea sent to 'Heaven's Mother' in Part the Third; this appears to be a reference to the Virgin Mary, a major figure in Christianity and particularly the Catholicism of Coleridge's period. ...read more.

Secondly, 'h**l' is mentioned in Part the Fourth; an idea found prominently in Christianity but only in Paganism as a last resort as the majority of Pagans believe in reincarnation. The 'angels' referred to in Part the Fifth are also an idea associated with Christianity, as Pagans have Gods and Goddesses that appear to take the place of angel figures in their religion. In the same stanza as 'h**l' is referred to the Mariner also says 'Seven days, seven nights', again this could be a reference to the seven day creation in Genesis. The part of the poem where the Mariner prays to God is crucial to the meaning of the poem. It may seem minor compared to the many references to the supernatural, in Christianity praying is the most powerful thing one can do so, for Christians, when the Mariner is able to pray in this way it guarantees he will be forgiven and is truly sorry. Praying is such a strong part of Christianity, I feel it must be significant in what Coleridge wished to present to the reader. In conclusion, I believe this poem is aimed at giving a Christian message. However, Coleridge believed the main purpose for 'The Rime of the Ancient Mariner' was to speak to the reader personally, so deliberately made the characters, themes and religions involved ambiguous to a certain extent. ...read more.