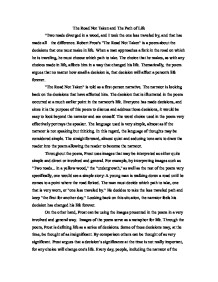 The Road Not Taken and The Path of Life.

The Road Not Taken and The Path of Life "Two roads diverged in a wood, and I took the one less traveled by, and that has made all the difference. Robert Frost's "The Road Not Taken" is a poem about the decisions that one must make in life. When a man approaches a fork in the road on which he is traveling, he must choose which path to take. The choice that he makes, as with any choices made in life, affects him in a way that changed his life. Thematically, the poem argues that no matter how small a decision is, that decision will affect a person's life forever. "The Road Not Taken" is told as a first-person narrative. The narrator is looking back on the decisions that have affected him. The decision that is illustrated in the poem occurred at a much earlier point in the narrator's life. ...read more.

The man must decide which path to take, one that is very worn, or "one less traveled by." He decides to take the less traveled path and keep "the first for another day." Looking back on this situation, the narrator feels his decision has changed his life forever. On the other hand, Frost can be using the images presented in the poem in a very involved and general way. Images of the poem serve as a metaphor for life. Through the poem, Frost is defining life as a series of decisions. Some of these decisions may, at the time, be thought of as insignificant. By comparison others can be thought of as very significant. Frost argues that a decision's significance at the time is not really important, for any choice will change one's life. Every day, people, including the narrator of the poem, are presented with "Two roads" that diverge "in a yellow wood." ...read more.

This pattern creates a very rhythmic and flowing poem. That carries the reader from line to line, stanza to stanza. Underneath this rhyme scheme lies a strict rule for the syllables in each line as well. The lines alternate between eight and nine syllables. This provides a contrast since rhyming lines do not necessarily contain the same number of syllables. This choice by Frost pulls the reader into the poem, but maintains the thought-like atmosphere as the narrator reminisces about his life at the decisions that he made and their results. In his perhaps best-known poem, Frost recognizes something that people should realize. The simple picture of a man deciding which path to follow is suddenly changed into a description of life by the mastery of Frost's poetic hand. No matter how small a decision appears to be at the time that it is made, that decision will affect a person's life forever, or as Frost puts it, each and every choice will make all the difference. ...read more.