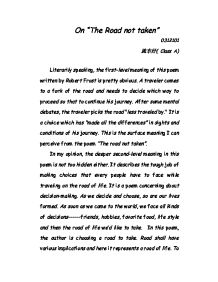 On "The Road not taken" 0312101 ???( Class A) Literarily speaking, the first-level meaning of this poem written by Robert Frost is pretty obvious. A traveler comes to a fork of the road and needs to decide which way to proceed so that to continue his journey. After some mental debates, the traveler picks the road "less traveled by." It is a choice which has "made all the differences" in sights and conditions of his journey. This is the surface meaning I can perceive from the poem "The road not taken". In my opinion, the deeper second-level meaning in this poem is not too hidden either. It describes the tough job of making choices that every people have to face while traveling on the road of life. It is a poem concerning about decision-making. As we decide and choose, so are our lives formed. As soon as we came to the world, we face all kinds of decisions------friends, hobbies, favorite food, life style and then the road of life we'd like to take. ...read more.

The most unforgettable thing in the world is always the thing you are impossible to get. The most attractive road is the road you did not have an opportunity to take. Sorry", "sigh" and "doubted" make the tone of poem somewhat gloomy. He realizes he probably won't pass the way again. So the former road not taken by him becomes a forever pity which would be carved in his mind. "Two roads", "couldn't travel both", "be one traveler", the contradictory feeling in the poem is obvious. It is not easy to make a decision. Two roads and one traveler, it is impossible for one traveler to travel two roads both. "As far as I could" means the author himself is trying his best to make a meticulous review on both of them and hope to make a decision as perfect as he can. The second and third part of the poem describes a tough mental struggle and the author is making all his efforts to support his own decision for it is "perhaps the better claim". ...read more.

He is satisfied with his own choice and the path he has taken. This poem is to express his sentimental feelings when he is looking back though his life? So it is a poem of individualism and to praise the spirit of pioneer. He is proud of himself of choosing the road less taken because it made all the difference. In his mind, the differences may be good. I think her claim is also reasonable if I could see the title from a different aspect. Then it may be emphasizing the road he himself has taken as his life's road though it is a road less taken by other people. "I took the one less traveled by, and that has made all the differences." The author may be feeling satisfied with his status quo and be proud of the "differences". But how can she explain the author's "sorry and sigh"? Anyway, different people get different "life" from a same poem. ...read more.