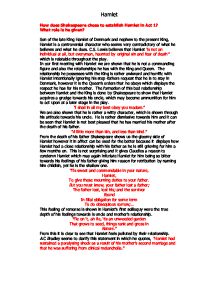 The role of Hamlet

How does Shakespeare chose to establish Hamlet in Act 1?

What role is he given?

Son of the late King Hamlet of Denmark and nephew to the present King, Hamlet is a controversial character who seems very contradictory of what he believes and what he does. C.S. Lewis believes that Hamlet ‘is not an individual at all, but everyman, haunted by original sin and fear of death” which is relatable throughout the play.

In our first meeting with Hamlet we are shown that he is not a commanding figure and also the relationships he has with the King and Queen.  The relationship he possesses with the King is rather awkward and horrific with Hamlet intentionally ignoring his step-fathers request that he is to stay in Denmark, however it is the Queen’s orders that he obeys which displays the respect he has for his mother.  The formation of this bad relationship between Hamlet and the King is done by Shakespeare to show that Hamlet acquires a grudge towards his uncle, which may become ammunition for him to act upon at a later stage in the play.

“I shall in all my best obey you madam.”

We are also shown that he is rather a witty character, which is shown through his attitude towards his uncle.  He is rather dismissive towards him and it can be seen that Hamlet is not best pleased that he has married his mother after the death of his father.

“A little more than kin, and less than kind.”

From the death of his father Shakespeare shows us the gloomy side of Hamlet however it in affect can be used for the better because it displays how Hamlet had a close relationship with his father as he is still grieving for him a few months on.  This is not surprising and it gives Claudius a reason to condemn Hamlet which may again infuriate Hamlet for him being so bitter towards his feelings of his father giving him reason for retribution by naming him childish, yet he is the shallow one.

“Tis sweet and commendable in your nature,

To give these mourning duties to your father.

But you must know, your father lost a father;

The father lost, lost his; and the survivor

In filial obligation for some term

To do obsequious sorrow;…

This feeling of remorse is shown in Hamlet’s first soliloquy were the true depth of his feelings towards is uncle and mother’s relationship.

That grows to seed, things rank and gross in

From this it is clear to see that Hamlet feels polluted by their relationship.  A.C Bradley seems to clarify this statement in which he quotes, “Hamlet had sustained a paralysing shock as a result of his mother’s second marriage and that he was suffering from clinical melancholia.”

We also develop an understanding that he would rather kill himself than see this relationship grow, but at the same time it is his religion that stops him from doing so.  Shakespeare may include Hamlet’s religion and the loyalties he has toward it, so that we remember he is a moral man and he can use this morale for redemption after his downfall.

“…Or that the Everlasting had not fixed

How weary, stale, flat and unprofitable…”

Moreover, this anguish he has towards his uncle and mother distinguishes the passion he has for his father’s death and the fury, infatuation and uproar that he possesses.

“So excellent a king, that was to this

Hyperion to a satyr, so loving to my mother

That he might not beteem the winds of heaven

Visit her face too roughly.”

Shakespeare also decides to present Hamlet as a misogynist.  This may be done to further improve the image of distaste that Hamlet has for his mother and her sins.

“Frailty, thy name is

From these first few scene’s it is very clear to see that Shakespeare has presented Hamlet as a confused and depressed character who cannot get around the deep pain he is going through for his father’s death.  This adds to the suffering that he may be feeling which may overcome him eventually only to act upon it in a rage of fury or passion.

As the play continues it is clear to see that Hamlet and Horatio seem to have a rather close relationship.  When Hamlet is being told by Horatio about the ghost it seems that they both use the same lines to illustrate their feelings of bewilderment.

It is not clear at the minute as to what Shakespeare is up to but I believe the relationship they have with each other may be very important in the upcoming scenes.

We also grow to learn that Hamlet is a very intellectual man when using trick questions about his father’s appearance as a ghost.  It is not surprising that he chooses this approach as he needs to tread carefully because he cannot prove this sighting for himself but his ability to slip these trick questions into conversation is impressive.

“His beard was grizzled – no?”

In this scene Hamlet is also used to cause dramatic tension and give an insight into the plot.  Since the sighting of the ghost it has been a recurring idea that all is not well in Denmark.  Hamlet seems to further the tension concerning Denmark in his second soliloquy.

I doubt some foul play.  Would the night

Hamlet also seems like a character who knows a lot of historical background.  Shakespeare gives him this quality so that the audience can relate to the events of that time and their traditions.  This is made apparent when Horatio questions Hamlet on wither it is traditional or not for Claudius to have a flourish of trumpets and a cannon ball fired.  This historical background gives the audience an insight into the past traditions of the castle and also Hamlets feelings of annoyance towards it and how it makes other nations think that they are louts.

“…to the manner born, it is a custom

More honoured in the breach than the

Hamlet’s insight into the running of the country is rather academic.  He admittedly knows that one bad thing can corrupt the reputation or the way a nation is viewed.  He also has deep concerns about the country which can be related to the true qualities of a king.  This intellectual side shows that Hamlet likes to thoroughly think things through, however this may be a quality that will hold him back in the future.  He also seems to engage in a philosophical argument himself.  Perhaps Shakespeare includes this so it can be related to what may happen to Hamlet at a later stage.

“So, oft it chances in particular men,

That for some vicious mole of nature in them,

As in their birth, wherein they are not guilty…”

The feeling of Hamlet as a brave and commanding figure is not felt throughout the first scenes of the play.  It is also made apparent that this is a quality Hamlet does not possess when he is confronted by the ghost and it puts him on edge.  His religion also comes into play with the appearance of the ghost because he calls upon heaven to defend them.  This gives Hamlet a sense of naivety and he seems to be clearly unaware of the difference between good, evil and death.  This yet again is another quality which may hold him back from acting upon requests in the play.

“Angels and ministers of grace defend us.

Be thou a spirit of health and goblin damned,

Bring with thee airs from heaven, or blasts

It seems that curiosity gets the better of Hamlet and also his grief and need to know what happened to his father drives him to go with the Ghost once it beckons him.  This in a way does contradict that fact that he may be a coward but it his curiosity that makes him determined to know what has happened.

And for my soul, what can it do to that

Being a thing immortal at itself?”

Furthermore we are introduced to a new characteristic of Hamlet and that is dominance.  He seems to be that intrigued by the Ghost that he threatens his own acquaintances, Horatio and Marcellus.  We have not been open to this side before and it seems that he can be easily angered in challenging situations.  Shakespeare intentionally introduces a flaw into Hamlet’s character.

“By heaven I’ll make a ghost of him that

It seems that Shakespeare draws out tension and suspense by the ghost revealing all slowly.  He claims that Claudius murdered him and Shakespeare used short words to show the astonishment of Hamlet, after finding out about this.  “Murder?”

This is perhaps done to show the growing irritation that Hamlet holds towards his uncle and revenge is gradually building up within him to act upon and he seems overtly eager to kill his father’s killer.

“Haste me to know’t, that I with wings as swift

As meditation to the thoughts of love,

May sweep to my revenge.”

The previous point of him thinking things through does not come to surface here and it appears that he is acting upon immediate instinct to gain revenge.

The complete devastation that Hamlet feels towards this new revelation is excruciating and it seems that the audience can relate to his want to seek revenge.

“O all you host of heaven! O earth! What else?

And shall I couple hell? O fie! Hold, hold,

It is understandable that Hamlet has this remorse towards his uncle but it does appear strange that Hamlet has a sudden change of tone “O wonderful”.  It could simply be shell-shock but I believe it may be his conscious coming into play after acting upon hatred and true disbelief.  This point is reinforced by the critic Samuel Taylor Coleridge who believed that ‘Hamlet was prevented from acting because he thought too much and lost the power of action in the energy of resolve.”

Hamlet as a morale man is displayed when he curses the burden which has been put upon him.  It seems that he is in the wrong place at the wrong time and he continues to question why it has been put in his hands.  This shows how he is having second thoughts after saying he shall seek revenge.

“The time is out of joint.  O cursed spite,

That ever I was born to set it right.”

This acts as a redeeming feature for Hamlet and Shakespeare may include this for us to remember after his downfall as a hero.

Throughout act 2 there is much evidence that Hamlet is a thoughtful, intellectual character who has many redeeming features and the qualities of a true king.  It is not exactly recognisable what role is being set out for Hamlet at this present time but it seems that Shakespeare is laying down a controversial set of events that will encourage Hamlet to act out of character in his seek for revenge.