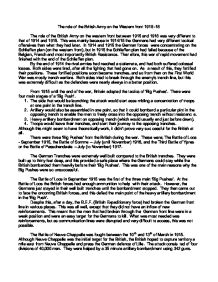 The role of the British Army on the Western front 1915-18 The role of the British Army on the western front between 1915 and 1918 was very different to that of 1914 and 1915. This was mainly because in 1914/15 the Germans had very different tactical offensives than what they had later. In 1914 and 1915 the German forces were concentrating on the Schlieffen plan (on the western front), but in 1915 the Schlieffen plan had failed because of the Belgian, French and most importantly British Resistance. Therefore, this war of rapid movement had finished with the end of the Schlieffen plan. By the end of 1914 the rival armies had reached a stalemate, and had both suffered colossal losses. Both sides were tired, after all the fighting that had gone on. As a result of this, they fortified their positions. These fortified positions soon became trenches, and so from then on the First World War was mostly trench warfare. Both sides tried to break through the enemy's trench line, but this was extremely difficult as the defenders were nearly always in a better position. From 1915 until the end of the war, Britain adopted the tactics of 'Big Pushes'. There were four main stages of a 'Big Push'. 1. The side that would be launching the attack would start assembling a concentration of troops at one point in the trench line. ...read more.

10,000 allied troops were affected by the gas attacks; half of which died. The Germans had not planned to send reinforcements as they did not think that they would achieve a break through. Because of this, it meant that they could not exploit their advantage at the time to the full. The attacks on the allies meant that they had to retreat, and they lost high ground making their positions weaker. The Germans then attacked Canadian troops, who suffered heavily with 5,975 casualties including 1,000 fatalities. IN May there were renewed gas attacks by the Germans - although not so effective. But still, the Germans still gained land to the east of Ypres. Losses from the second Battle of Ypres are estimated at 69,000 allied troops (59,000 British) against 35,000 German troops. The gas that was used by the Germans was chlorine gas, and this success set the trend for the rest of the war. The Germans abandoned their attack when they ran into their own gas. Ypres was extremely significant to Britain in the First World War, as it enabled access to the channel ports to Britain. It was very important for Britain to keep control of Ypres from the Germans, and even though they may have suffered many causalities, Ypres was still under their control. The Battle of the Sommes was the second 'Big Push' by the British. It was fought between July and November 1916. ...read more.

Once again, no break through was achieved. Only a few miles of territory had been gained, and this came with a terrible cost. The British lost 360,000 men whilst the Germans lost 245,000 men. Later towards the end of November 1917 the British were more successful in the battle of Cambrai. They used the tank to their advantage (324 tanks) and five divisions. This time, they used the element of surprise, unlike the 'Big Pushes'. By nightfall on the first day of attack, the British had achieved a bulge in the German defence line. 179 tanks had been lost, but they had shown that they could be extremely effective on the battlefield. The Germans did recover most of the land that they lost in a counter attack a few days later. This battle was significant as a new way to stop the Trench Warfare deadlock had been found - tanks. The role of the British Army on the western front between 1915 and 1918 was very different to that of 1914. The British Army had to protect the costal ports to secure traffic between France and Britain. Britain also had to protect Paris and France. Although the 'Big Pushes' that Britain made were mostly unsuccessful, they tired out the German Army. As the navy controlled everything in and out of Germany, Britain basically had to fight a war of attrition, as Germany would (and did) run out of supplies. Britain managed to do this well, thus proving to be a key nation helping winning the war. Jack Macfarlane ...read more.