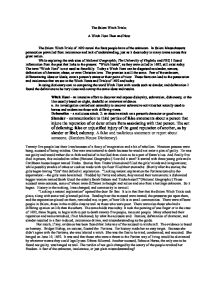 The Salem Witch Trials: A Witch Hunt Then and Now The Salem Witch Trials of 1692 reveal the fears people have of the unknown. In Salem Massachusetts persecution prevailed from intolerance and lack of understanding, just as it does today in many towns across this great nation. While exploring the web sites of National Geographic, The University of Virginia, and PBS, I found information from the past that links to the present. "Witch Hunts", as they were called in 1692, still exist today. The term "Witch Hunt" is not used as forcefully. Today a Witch Hunt can be disguised as slander, rumors, defamation of character, abuse, or even Christian love. The premise is still the same. Fear of the unknown, differentiating ideas or ideals, even a person's status or their point of view. These fears can lead to the persecution and intolerance that we see in the Witch Hunts and Trials of 1692 and today. In using dictionary.com to comparing the word Witch Hunt with words such as slander, and defamation I found the definitions to be very close and convey the same ideas and results. Witch Hunt - an intensive effort to discover and expose disloyalty, subversion, dishonesty, or the like usually based on slight, doubtful or irrelevant evidence. ...read more.

Reading how the accused were treated, the pressures put upon them, and the expectation placed on them, reminded me, in part, of how life is in small communities. There were affluent people in Salem, those in the middle class as well as those who were poor. There were also those who had a differing opinion on life than the others. The same holds true today. It took the pointing of one finger or in the case of 1692, three fingers, to begin with to put to death twenty-five people, innocent people. Many others had their reputation and name tarnished, if not blackened, by what the accusers said. Rumors, defamation of character, and slander resulted in a fear-induced, intolerance driven, and misunderstanding as the guide. Not much, if any, evidence has been found that links any of the accused to witchcraft. The evidence is based on hearsay. Bridget Bishop, an outcast, flouted the Puritans. Her history made her an easy target. Because she didn't agree with the Puritans, she was labeled a witch. She was the first to be tried, condemned, and executed. She hanged on June 10, 1692. It was said that those who were a threat to the Puritan way of living would be eliminated by whatever means they could legally use. Others followed. ...read more.

Hallucinations, convulsions, bizarre skin sensations, and other unusual symptoms may have been revealed. That would explain, in part, the physical aspect of what some believed to be witchcraft. (PBS) When the unknown baffles us we often search for reasons or start pointing fingers. This very well may have been what happened in Salem. A few of those accused were in the way or disliked and the accusers wanted them gone. Today, the damage is devastating; leaving families broken, relationships in ruins, and communities in upheaval. I also noticed that in the time of Jesus the same type of behavior was evident. Yes, Jesus died for us. It was the ultimate sacrifice. But there is the word of His accusers, the following of an empire, and the destruction of a man. In this case it had to be done. The association between the past, the present, and the future shows us in a very real way that the history of the past plays a part in the future. Will we learn? To look for the truth before pointing an accusing finger, to exhibit tolerance and accept change, to understand our fears. When we put these simple principals to practice we can live life not as one, who is accused, or one who accuses but as one free to live in harmony with others. ...read more.