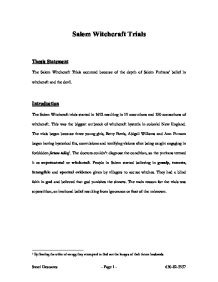 The Salem Witchcraft Trials occurred because of the depth of Salem Puritans' belief in witchcraft and the devil.

Salem Witchcraft Trials Thesis Statement The Salem Witchcraft Trials occurred because of the depth of Salem Puritans' belief in witchcraft and the devil. Introduction The Salem Witchcraft trials started in 1692 resulting in 19 executions and 150 accusations of witchcraft. This was the biggest outbreak of witchcraft hysteria in colonial New England. The trials began because three young girls, Betty Parris, Abigail Williams and Ann Putnam began having hysterical fits, convulsions and terrifying visions after being caught engaging in forbidden fortune telling1. The doctors couldn't diagnose the condition, so the puritans termed it as supernatural or witchcraft. People in Salem started believing in gossip, rumors, intangible and spectral evidence given by villagers to accuse witches. They had a blind faith in god and believed that god punishes the sinners. The main reason for the trials was superstition, an irrational belief resulting from ignorance or fear of the unknown. ...read more.

Tituba was pointed out by the three girls and accused of teaching them witchcraft and fortune telling, which resulted in their strange behavior. Tituba did not deny the allegations. She confessed to being a witch after Reverend Parris beat her. Because she confessed, she was not executed. In her trial she said "The devil came to me and bid me serve him" and talked about black dogs, red cats, yellow birds, and a white-haired man who bade her sign the devil's book. She also identified Sarah Good and Sarah Osborne as witches. Since the people were superstitious and believed in the supernatural and evil, they believed in the stories told by Tituba. Bridget Bishop4 was an old widow acquitted of witchcraft. She was well known to the villagers, for she ran an unlicensed tavern out of her house. Physical evidence such as "popitts made up of rags and hoggs" with pins stuck in them were found in the cellar walls of her house. ...read more.

Tituba baked a Witch cake and fed it to the dog. Sarah good's curses were responsible for the failing of crops and death of livestock. All these evidences prove that people were highly superstitious and lacked scientific/logical reasoning. Conclusion The main cause of the Salem Witchcraft trials is the blind faith people had in the supernatural, Devil and God. Lack of scientific or logical thinking made people believe in evil in the form of witches and wizards. The beliefs in spectral evidences and intangible proof often given to accuse witches, lead to the examinations and executions of the witches. 1 By floating the white of an egg they attempted to find out the images of their future husbands 2 Referred from "Christ knows....in his churches" a sermon by reverend Samuel Parris 3 Referred from the section Govt. Documents - The examination of Tituba 4 Referred from the section Govt. Documents - Case against Bridget Bishop 5 Testimony of Benjamin Gould against Giles and Martha Cory 6 Stephan Bittford's testimony vs. Elizabeth Proctor Swati Desoares - Page 1 - 630-82-5957 ...read more.