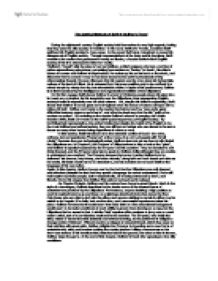 The Satirical Methods of Swift in Gulliver's Travels.

The Satirical Methods of Swift in Gulliver's Travel During the eighteenth century English society held themselves in very high regards, feeling that they were the elite society of mankind. In his novel, Gulliver's Travels, Jonathan Swift satirizes this English society in many ways. In the novel, Swift uses metaphors to reveal his disapproval of English society. Through representations of the body and its functions, Swift reveals to the reader that greatness is merely an illusion, a facade behind which English society of his time attempted to hide from reality. "Gulliver's Travels" tells the story of Lemuel Gulliver, a ship's surgeon who has a number of rather extraordinary adventures, comprising four sections or "Books." In Book I, his ship is blown off course and Gulliver is shipwrecked. He wakes up flat on his back on the shore, and discovers that he cannot move; he has been bound to the earth by thousands of tiny crisscrossing threads. He soon discovers that his captors are tiny men about six inches high, natives of the land of Lilliput. He is released from his prone position only to be confined in a ruined temple by ninety-one tiny but unbreakable chains. In spite of his predicament, Gulliver is at first impressed by the intelligence and organizational abilities of the Lilliputians. ...read more.

It is in this chapter that Gulliver first asks to be freed and is refused. As Chapter III starts, Gulliver and his captors have become great friends. Much in the style of a travelogue, Gulliver describes for the reader some of the unusual forms of entertainment practiced by the Lilliputians. For instance, anyone desiring a high position at court is required to jump up and down on a tightrope stretched six inches above the floor. Only those who are able to do it win the office, and anyone wishing to remain in office may be asked to do it again. If he fails, he's out the door, and a successful ropedancer takes his place. Gulliver remarks that it would seem that noble birth or a fine educational background would seem to be better predictors of one's ability to govern than dancing on a rope, but the Lilliputians find no sense in that. A similar "trial" requires office-seekers to jump over or crawl under a stick, sort of a combination vault and limbo exercise. The Emperor, who holds the stick, raises or lowers the stick suddenly and without warning, so the performer is obliged to change tactics midstream. Winners receive a snippet of coloured thread, which they wear on their clothing with great pride. Gulliver delights the Emperor by inventing some new forms of entertainment, also; one involves making the cavalry perform military manoeuvres on the drum-taut surface of his handkerchief, stretched above the ground, but when a rider is thrown, Gulliver stops the game. ...read more.

Many Lilliputians refused to do so, as since time immemorial their creed had been to break their eggs on the larger end, and they insisted on their right to do so. This caused them to emigrate to Blefuscu, and now that country, bolstered by its new angry citizens, is planning an invasion against Lilliput. Swift is saying that the argument between the Low-Heels and the High-Heels is ridiculous-almost as silly as the war between the Big-Enders and the Little-Enders. During Swift's lifetime, an equally high level of animosity existed between the various English sects which considered themselves Protestant, and between the English Protestants collectively and the Catholics on the Continent. Swift, an Anglican clergyman himself is clearly showing how ridiculous such differences among people who are allfollowers of the same path. Gulliver's Travels is a satirical novel of the eighteenth century English society, a society with superficial ideas of greatness and nobility. Through clever representations, Jonathan Swift successfully humbles this society's pride and human vanity. He reveals the flaws in their thinking by reducing them to what they are, human beings, which, like any other group of human beings is able to do, have merely adopted a superficial self righteous attitude. In doing so, Swift makes a broader statement about mankind today. Despite all the self-acclaimed advances in civilization and technology, we are still merely human; suffering from the same forces and flaws, impulses and imperfections as everyone else. ...read more.