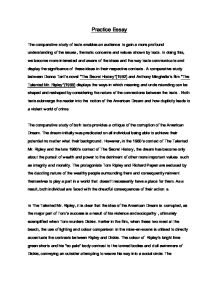 Practice Essay The comparative study of texts enables an audience to gain a more profound understanding of the issues, thematic concerns and values shown by texts. In doing this, we become more interested and aware of the ideas and the way texts communicate and display the significance of these ideas in their respective contexts. A comparative study between Donna Tartt's novel "The Secret History"(1992) and Anthony Minghella's film "The Talented Mr. Ripley"(1999) displays the ways in which meaning and understanding can be shaped and reshaped by considering the nature of the connections between the texts. Both texts submerge the reader into the notion of the American Dream and how duplicity leads to a violent world of crime. The comparative study of both texts provides a critique of the corruption of the American Dream. The dream initially was predicated on all individual being able to achieve their potential no matter what their background. ...read more.

This is ultimately displayed in the long shot of the boat, with birds in the background, the horizon and the endless azure of the Mediterranean Sea juxtaposing with the violence of Tom beating Dickie to death. These ideas are also explained in The Secret History, making the study of the two texts more challenging and interesting, as we are able to see a clear link regarding the represented issues. Similarly, The Secret History presents us with Richard Papen, who, like Tom, tries to elevate himself to an elite wealthy group, and ultimately discard all traces of his mediocre and unexciting middle-class upbringing. His aspirations in life drive him to lie, cheat and eventually live by the "greed is good" zeitgeist of the 1980's. Much like Tom, Richard desires to escape the humdrum life of the lower middle class and accomplish the American Dream. Ominous speeches such as "We think we have many desires, but in fact we have only one. ...read more.

In response to a derogatory comment aimed at Henry, Richard replies offended, "I kind of like him", juxtaposing the two characters with contrary characteristics. Once Tom manages to ingratiate himself with Dickie, "You're the brother I never had. I'm the brother you never had. I would do anything for you, Dickie." he learns how to imitate the way he dresses and speaks, his body language and gestures, so that he can manipulate himself to be Dickie. Thus, Tom is seen to have a "double personality" of sorts, which is represented through the recurring motif of mirrors, acting as a visual metaphor for his deceptive character, and likewise, Richard deceives others for a position in the upper class of the society. Therefore, the comparative study of the two texts has propelled the understanding of books such as The Secret History and films such as The Talented Mr. Ripley. No doubt, an underlying idea for a story is very important, but if the texts are analysed through complex comparison, we as audiences are able to grasp a more profound understanding of the issues and by doing so, make the texts more interesting. ...read more.