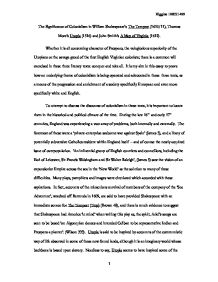 The Significance of Colonialism in William Shakespeare's The Tempest (1610/11), Thomas More's Utopia (1516) and John Smith's A Map of Virginia (1612). Whether it is all consuming character of Prospero, the vainglorious superiority of the Utopians or the savage greed of the first English Virginian colonists; there is a common will exercised in these three literary texts: conquer and take all. It is my aim in this essay to prove how an underlying theme of colonialism is being operated and advocated in these three texts, as a means of the progression and enrichment of a society specifically European and even more specifically white and English. To attempt to discuss the discourse of colonialism in these texts, it is important to locate them in the historical and political climate of the time. During the late 16th and early 17th centuries, England was experiencing a vast array of problems, both internally and externally. The foremost of these were a 'private-enterprise seaborne war against Spain' (James 5), and a litany of potentially subversive Catholics resident within England itself - and of course the newly acquired issue of overpopulation. 'An influential group of English courtiers and councillors, including the Earl of Leicester, Sir Francis Walsingham and Sir Walter Raleigh', (James 5) saw the vision of an expansionist Empire across the sea in the 'New World' as the solution to many of these difficulties. Many plays, pamphlets and images were circulated which accorded with these aspirations. In fact, accounts of the miraculous survival of members of the company of the 'Sea Adventure', wrecked off Bermuda in 1609, are said to have provided Shakespeare with an immediate source for The Tempest (Tmp) (Brown 48), and there is much evidence to suggest that Shakespeare had America 'in mind' when writing this play as, the spirit, Ariel's songs are seen to be based 'on Algonquian dances and intended Caliban to be representative Indian and Prospero a planter'. ...read more.

The magical power that Prospero holds never comes into question for he is a white male and even though his sorcery too is evil and causes harm, he is protected by the colonial hegemony he has established upon the island. Thus Prospero establishes a colonial power which is specifically white and male. He goes to great pains to enroot this belief by reminding the spirit Ariel of the cruel life enforced upon him by the island's old queen: This damned witch Sycorax, / For mischiefs manifold and sorceries terrible / To enter human hearing, from Algiers / Thou know'st was banished-for one thing she did / They would not take her life...Thou, my slave, / As thou report'st thyself, was then her servant,...Refusing her grand hests, she did confine thee...Into a cloven pine (Shakespeare 1.2.264-277). Prospero sees himself as superior and therefore reasonable in his enslavement of Caliban; because of Caliban's assumed physical defects, his lineage from the corrupt witch Sycorax and his uncivilised behaviour. Prospero has confined Caliban on the 'hard rock' (Shakespeare 1.2.343) because of an unsuccessful attempt to r**e Miranda, but previous to this act, Prospero and Miranda had attempted to educate and civilise Caliban - with disappointing results. Abhorred slave, / Which any print of goodness wilt not take, / Being capable of all ill! I pitied thee, / Took pains to make thee speak, taught thee each hour ...but wouldst gabble like / A thing most brutish... But thy vile race- / Though thou didst learn-had that in't which good natures / Could not abide to be with ; therefore wast thou / Deservedly confined into this rock, / Who hadst deserved more than a prison. (Shakespeare 1.2.350-361). Caliban is a failure at learning properly the language that Miranda has gone to such great pains to teach him. Prospero once even once 'lodged thee/ In mine own cell, till thou didst seek to violate / The honour of my child' (Shakespeare 1.2.346-348). ...read more.

The Utopians regard slavery as a normal part of their culture, and similar to Prospero's chastisement of Caliban, use it as 'the punishment even of the greatest crimes; for as that is no less terrible to the criminals themselves than death, so they think the preserving them in a state of servitude is more for the interest of the commonwealth than killing them; since as their labour is a greater benefit to the public than their death could be, so the sight of their misery is a more lasting terror to other men than that which would be given by their death. If their slaves rebel, and will not bear their yoke and submit to the labour that is enjoined them, they are treated as wild beasts that cannot be kept in order, neither by a prison nor by their chains, and are at last put to death'. (More 35). 'Another sort of slaves are the poor of the neighbouring countries, who offer of their own accord to come and serve them; they treat these better, and use them in all other respects as well as their own countrymen, except their imposing more labour upon them, which is no hard task to those that have been accustomed to it.' (More 33). A form of communal living presides in the countryside, people living together in 'country families', which consist of no ' fewer than forty men and women in it, besides two slaves' (More 17). All of the most menial and unpleasant tasks of Utopian life are performed by these slaves, such as the slaughter and butchering of animals, for 'they suffer none of their citizens to kill their cattle, because they think that pity and good nature...are impaired by the butchering of animals.' (More 23). The Utopians regard themselves as morally and intellectually superior to these slaves, but due to their love of education, take it upon themselves to redeem these slaves through knowledge and pestilence. ...read more.