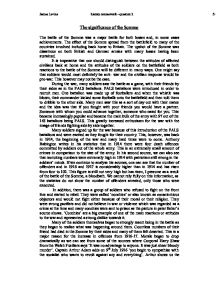 The significance of the Somme

The significance of the Somme The battle of the Somme was a major battle for both losses and, in some cases achievements. The effect of the Somme spread from the battlefield to many of the countries involved including back home to Britain. The upshot of the Somme was disastrous on both British and German armies with many losses having been sustained. It is imperative that one should distinguish between the attitudes of affected civilians back at home and the attitudes of the soldiers on the battlefield as both reactions to the battle of the Somme will be different in many ways. One might say that soldiers would most definitely be anti- war and the civilian response would be pro-war. This however may not be the case. During the war, many soldiers saw the battle as a game, with their friends by their sides as in the PALS battalions. PALS battalions were introduced in order to recruit men. ...read more.

We cannot rely fully on this information, as the statistics do not show the number of offenders arrested, only those who were executed. In addition, there was a group of soldiers who refused to fight on the front line and started to rebel. They were called 'conchies' or also known as conscientious objectors and would not fight either because of their moral or their religion. They were strong pacifists and did not believe in war or violence which was regarded as a crime at the time and many conchies were sent to prison as the picture in peter fisher's source shows. 'Conchies' are a big example of one of the main reactions or attitudes to the war and represented a strong dislike towards it. Many of the soldiers themselves began to strongly resent being in the battle as they began to realise what was happening around them. Countless numbers of their friend had died in the Somme by their sides and many of them felt deserted. ...read more.

These deaths had caused a lot of grief in the British nation at the time as many thought that they should pull out after all the losses that they had sustained. Others thought that the allies should finish what they started seeing as they decided to get involved and they should have the decency to finish it and some wanted to obliterate Germany, the enemy. One of the main catalysts for speeding up changes in public attitude were the newspapers which often distorted stories into a different light often against the Germans spurring an anger in the public. Many poems show the attitude of the Somme including Wilfred Owen and Siegfried Sassoon. Many people bought their poems as they reminded them of the life at the front and how terrible it was. Both Owen and Sassoon were popular as both of them fought at the front line and Wilfred Owen died there. Many people who bought the poems also did so as they wanted to regard the Somme as a good event, not a massacre. ?? ?? ?? ?? James Levine history coursework - question 2 5/10/2007 ...read more.