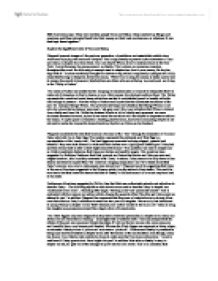 The significant roles of Tom and Daisy in the Great Gatsby

Nick Carraway says- They were careless people Tom and Daisy - they smashed up things and creatures and they retreated back into their money or their vast carelessness or whatever it was that kept them together.' Explore the significant roles of Tom and Daisy. Fitzgerald presents images of the post-war generation of ambitious and materialistic middle class Americans enjoying the consumer lifestyles. This is significantly expressed by the characters of Tom and Daisy. In chapter two when Nick, Tom and Myrtle Wilson (Tom's mistress) travel to the New York Tom is throwing his money around on Myrtle. This is shown on numerous occasions throughout the novel the following is example used in chapter two: here's your money. Go buy ten dogs with it.' Tom has snobbishly brought his mistress a dog which is supposedly a pedigree he is fully aware that the dog is cheap but, he has the money. While Tom is using his money as status symbol and to occupy his pursuit of pleasure ( Myrtle) there are others who are suffering in poverty and are living in the 'Valley of Ashes.' The valley of Ashes was created by the dumping of industrial ashes or it could be interpreted that it is made out of decaying civilian's dreams or even their corpses from trying to achieve them. ...read more.

One may interpret that the effects of the post- war consumer lifestyle has taken it's toll on the two women who were once pure and beautiful have now become cold hearted. Whereas the West- Eggers are represent as being vulgar, un-educated Gatsby drives a' yellow car' and wears a 'pink suit'. Furthermore Gatsby is presented as being loyal and kind hearted in chapter seven after the tension of the confrontation even though, Daisy has chosen Tom. Gatsby waits outside her home to make sure that Tom does not harm her. 'I want to wait here till Daisy goes to bed. Good night old sport' In addition Nick tells us Gatsby's story in chapter six but, he gets rid off the dialogue to put it into his own words. This is an indication that Gatsby is not well educated or articulate as he asserts a childlike language: 'I'm going to fix everything just the way it was before ...... she'll see.' The character of Jordan Baker is a representation of the new women in the jazz age of America, she is cynical, boyish and a cheat. 'She was a slender, small breasted girl with an errect carriage. Her name was influenced by two famous automobile's trader. This indicates that Jordan Baker is also a representation of the rich mobile aristocrats from the 1920's. ...read more.

Tom on the other hand is in fact careless if you take a closer look into the novel you are able to identify that he is the catalyst of the novel. From the very beginning of the novel in chapters one and two Tom's immortality was giving life to the story I.e. his extra-marital relationship with Myrtle. If Tom never started his affair with Myrtle then, she would have never had begun to think that she was able to adapt to the new materialised social environment that inevitably lead to her death. Furthermore, Wilson would have never mistaken Gatsby for Tom and killed him for apparently having an affair with Myrtle Wilson. Tom fails to recognise that his actions have consequences even though, he can always retreat back into his money. In addition Tom is a major contribution to decay of religion in this novel he has replaced God with his faith in materialism. Lastly Tom demonstrates the seven deadly sins throughout the novel he portrays: * Gluttony-his greed for power * Pride- He seems to believe that his at higher level of social class than the other characters * Lust -succumbed to lust and has had many extra-marital relationships in the past. ('I go off on a spree and make a fool of myself but I always come back.') * Envy - Daisy was considering choosing Gatsby over him so Tom had him killed.('That fellow had it coming to him.') ?? ?? ?? ?? ...read more.