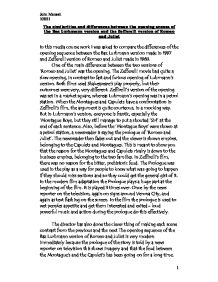 The similarities and differences between the opening scenes of the Baz Lurhmann version and the Zefferelli version of Romeo and Juliet.

The similarities and differences between the opening scenes of the Baz Lurhmann version and the Zefferelli version of Romeo and Juliet In this media course work I was asked to compare the differences of the opening sequence between the Baz Lurhmann version made in 1997 and Zefferelli version of Romeo and Juliet made in 1968. One of the main differences between the two versions of 'Romeo and Juliet' was the opening. The Zefferelli movie had quite a slow opening, in contrast to fast and furious opening of Luhrmann's version. Both films used Shakespeare's play properly, but their outcomes were very, very different. Zeffirelli's version of the opening was set in a market square, whereas Luhrmann's opening was in a petrol station. When the Montagues and Capulets have a confrontation in Zeffirelli's film, the argument is quite courteous, in a mocking way. But in Luhrmann's version, everyone is frantic, especially the 'Montague Boys, but they still manage to put a shouted 'Sir!' at the end of each sentence. Also, before the 'Montague Boys' were shown at a petrol station, a newsreader is saying the prologue of 'Romeo and Juliet'. The newsreader then fades out and the viewer is shown empires, belonging to the Capulets and Montagues. ...read more.

The Capulet's are the total opposite to the Montague's the Capulet's are the religious ones, as one of the members have a Cross shaved into his head and tybal has a picture of Christ on his waist coat this shows the viewer that the Capulet's are the religious type. Their costume is totally different from the Montagues the capulets where sharp suits and have their hair clean cut and nicely slicked. The face off with the Montague's is triggered off by Montagues insulting the Capulets, the reason for that is because abra scared 1 of the Montague members by showing his teeth. On abra's metal teeth its says "sin" this scares the Montagues so they retaliate by one of the members doing a hand gesture. The camera then shows the reaction of Abra by doing a close up of his face the music changes to a style like a Spaghetti western and you can here the sound of the spurs of the boots making the metallic sound. The Capulet' s use old-fashioned guns called rapiers and the Montague's use modern guns called swords. When you see the Capulet's draw their guns Tybalt kisses his gun and the camera is zooms up close enough to his face so you can see his lips connect to kiss his rapier. ...read more.

By that, I mean the Zefferelli version couldn't have a newsreader and in Luhrmann's film the people had to wear normal clothes, for this time and age. In Zefferelli film, the actors and actresses wore wonderful, extravagant costumes. These were perfect for the middle Ages, and looked very impressive. Just by looking at the clothes, the viewer would understand the importance of the two families. In Luhrmann's film everybody was wearing normal, everyday clothes, so there was no way that, you could tell the people were from important families. Also, in the two versions, the weapons used were different. Luhrmann's film used guns and Zefferelli film used swords. Another technique that Lurhmann used was the old language. The whole film was very, very modern, but Lurhmann decided to keep Shakespeare's old English in his motion picture. I found this really good, but it was also really confusing. I had just finished studying the book, so this helped me to understand the film. The two films are set in different locations, and this small factor changes the outcome of the two movies completely. If you watched the two movies, one after the other, you would be thinking, "This was based on the same play?" and amazingly the answer would be "YES!" Actually, you can tell the films are based on the same play, as they both have the same plot, but look ENTIRELY different. It's amazing! John Mensah 10B21 1 ...read more.