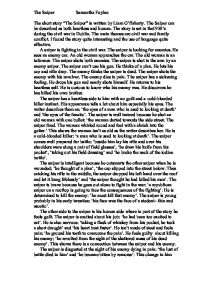 The Sniper Samantha Foylan The short story "The Sniper" is written by Liam O'flaherty. The Sniper can be described as both heartless and human. The story is set in the1930's during the civil war in Dublin. The main themes are civil war and family conflict. I found the story quite interesting and the use of language quite effective. A sniper is fighting in the civil war. The sniper is looking for enemies. He sees an enemy car. An old woman approaches the car. The old woman is an informer. The sniper shots both enemies. The sniper is shot in the arm by an enemy sniper. The sniper can't use his gun. He thinks of a plan. He lets his cap and rifle drop. The enemy thinks the sniper is dead. The sniper shots the enemy with his revolver. The enemy dies in pain. The sniper has a sickening feeling. He drops his gun and nearly shots himself. He returns to his heartless self. ...read more.

The sniper is intelligent because he outsmarts the other sniper when he is wounded: 'he thought of a plan', 'the cap slipped into the street below. Then catching his rifle in the middle, the sniper dropped his left hand over the roof and let it hang lifelessly' and 'the sniper thought he had killed his man'. The sniper is brave because he goes out alone to fight in the war: 'a republican sniper on a rooftop is going to face the consequences of the fighting'. He is determined to kill the enemy: 'he must kill that enemy'. The sniper is young probably in his early twenties: 'his face was the face of a student- thin and ascetic'. The other side to the sniper is his human side where in part of the story he feels guilt. The sniper is excited about his job: 'he had been too excited to eat'. ...read more.

There is a dramatic ending to the story, which is unexpected. I didn't expect it to turn out the way it did. I thought the enemy would be someone the sniper knew but I didn't expect it to be his brother. The ending is shocking because it is not expected. Now I am left wondering what affect it will have on the sniper and what he will tell his family. I found the story interesting but it had a shocking ending, which I didn't expect. When I started to read the story I thought the sniper didn't have a choice in the matter because he is in the army and is only doing his job. I feel sorry for the sniper because he killed his brother and he probably feels gutted that he killed his brother accidentally but if his brother had killed him then his brother would have felt the same way. The message of the story is 'Is civil war worth the damage it causes to families?'. ...read more.