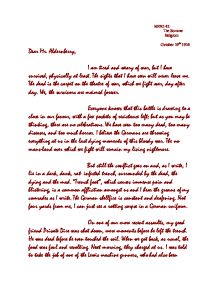 BFPO 42 The Somme Belgium October 19th 1916 Dear Mr. Aldernberry, I am tired and weary of war, but I have survived, physically at least. The sights that I have seen will never leave me. The dead is the carpet on the theatre of war, which we fight over, day after day. We, the survivors are maimed forever. Everyone knows that this battle is drawing to a close in our favour, with a few pockets of resistance left; but as you may be thinking, there are no celebrations. We have seen too many dead, too many diseases, and too much horror. I believe the Germans are throwing everything at us in the last dying moments of this bloody war. ...read more.

On one of our more recent assaults, my good friend Private Dire was shot down, mere moments before he left the trench. He was dead before he even touched the soil. When we got back, as usual, the food was foul and revolting. Next morning, they charged at us. I was told to take the job of one of the Lewis machine gunners, who had also been killed. It took a lot of time to get used to it, but when I did, it became cruelly easy. The Lewis machine gun has saved so many of our lives and decimated the German front line. I must have slaughtered at least 30 of them, but many escaped by diving back towards their trench, which reminded me of myself on the first day of fighting. ...read more.

My agony continued for a while, but then my eyes started to heal. Within hours, I was discharged and sent back to the front line, just in time for an early morning attack. I fired blindly into the advancing wall of German soldiers. Life is cheap and, in some ways, death would be a release from the horror and the brutality. I want to be home with my family before the shell shock gets to me too and I go mad. Some days I think I must have gone mad already. I have been here too long and I am not sure how much longer I can go on. Pray for me and all of us, Yours sincerely, James Mason Websites: http://www.http://www.spartacus.schoolnet.co.uk/FWWtrench.htm / http://www.educationzip.com/history.html, http://www.schoolhistory.co.uk/gcse.html, http://www.greenhead.ac.uk/beacon/history/ww1.htm ...read more.