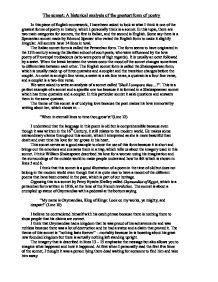 The sonnet: A historical analysis of the greatest form of poetry.

The sonnet: A historical analysis of the greatest form of poetry In this piece of English coursework, I have been asked to look at what I think is one of the greatest forms of poetry in history, which I personally think is a sonnet. In this topic, there are two main categories for sonnets, the first is Italian, and the second is English. Some say there is a Spenserian sonnet made by Edmund Spenser who varied the English form to make it slightly irregular. All sonnets have 14 lines in total. The Italian sonnet form is called the Petrarchan form. The form seems to have originated in the 13th century among the Sicilian school of court poets, who were influenced by the love poetry of Proven�al troubadours (who were poets of high regards). It is usually an octet followed by a sestet. When the break between the verses occur the mood of the sonnet changes sometimes to differentiate between each other. The English sonnet form is called the Shakespearean form, which is usually made up of three quatrains and a couplet and the transition changes before the couplet. An octet is an eight-line verse, a sestet is a six-line verse, a quatrain is a four-line verse, and a couplet is a two-line verse. We were asked to write an analysis of a sonnet called "Shall I compare thee...?". ...read more.

The theme of this sonnet is "nothing lasts forever" - mortality because he is boasting about his great new founded kingdom but there is actually nothing left standing upright. The imagery that is described in lines 13 - 15 emphasise the message but also allows you to imagine what happened and how it happened. At first when I personally read the first five lines of the sonnet, I thought it was a person lying there dead waiting for someone to find him and take him away. In my opinion, old language is used which means is not very comprehensive at first but it is related with the time period, and takes into account what people were like in that era because it is associated with the sonnet and would not make sense otherwise. The poet uses a sonnet form to underline his message that life is too brief and too short to be egotistical towards God. He uses this sonnet to express a rebuke to cruel and unfair politicians. Percy wanted a romantic view of the world and did not want a world like Ozymandias' era but it's still like it was along time ago even though we have votes, we still have taxes and if something doesn't go the way politicians want, we have to pay more tax. The moral of this sonnet was nothing lasts forever so it is teaching politicians that it will never be the same all the time. ...read more.

The reason for using a petrarchan form is because the separation between the octet and the sestet represents an expression of national pride. In my judgement, Ozymandias of Egypt and The Soldier are interconnected because Ozymandias of Egypt shows us the message about how nothing lasts forever and The Soldier shows us how we should remember the people who have fought for their own country, England. The only difference I could think of is that the period in time that they both belong to are different and that is shown in the language that each of them has chosen. I feel that Ozymandias of Egypt and "Shall I compare thee...?" are opposite because Ozymandias tells us how nothing lasts forever and "Shall I compare thee...?" shows us how if something is written down it becomes eternal and undying. I believe that these two sonnets cancel each other out because they are contrary. The only similarity between these two sonnets is the time in which they were written. I believe that The Soldier and "Shall I compare thee...?" have the same perspective but in a different phase in time because The Soldier talks about how you should remember the people who are acting out patriotism for their country and "Shall I compare thee...?" is saying how the poet is remembering his loved one and will never forget her but in a sense so is England to people who have fought for their country. BY Johnathan Lamb 11C ...read more.