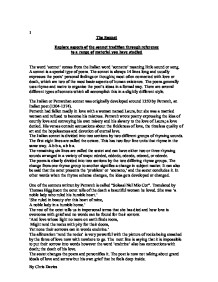 The Sonnet Explore aspects of the sonnet tradition through reference to a range of material you have studied The word 'sonnet' comes from the Italian word 'sonnetto' meaning little sound or song. A sonnet is a special type of poem. The sonnet is always 14 lines long and usually expresses the poets' personal feelings or thoughts; most often connected with love or death, which are two of the most basic aspects of human existence. The poem generally uses rhyme and metre to organise the poet's ideas in a formal way. There are several different types of sonnets which all accomplish this in a slightly different style. The Italian or Petrarchan sonnet was originally developed around 1350 by Petrarch, an Italian poet (1304-1374). Petrarch had fallen madly in love with a woman named Laura, but she was a married woman and refused to become his mistress. Petrarch wrote poetry expressing the idea of courtly love and conveying his own misery and his slavery to the love of Laura; a love denied. His verses contain accusations about the fickleness of love, the timeless quality of art and the hopelessness and devotion of eternal love. The Italian sonnet is divided into two sections by two different groups of rhyming sounds. The first eight lines are called the octave. This has two four line units that rhyme in the same way. A b b a, a b b a. The remaining six lines are called the sestet and can have either two or three rhyming sounds arranged in a variety of ways: cdcdcd, cddcdc, cdecde, cdeced, or cdcedc. The poem is clearly divided into two sections by the two differing rhyme groups. ...read more.

Shakespeare with this poem could have been mocking other poets who unrealistically and with the use of hyperbole compare their love to some object of beauty. Another Shakespearean sonnet 'Shall I compare thee...?' also displays how the 'rhyming couplet' ends the sonnet with a flourish. The first line of the poem: "Shall I compare thee to a summer's day?" is a rhetorical question and a wise way of starting the sonnet because it makes the reader curious; as they want to answer the question posed by Shakespeare. The first line also has great riches of implication packed into it. 'A summer's day' is itself full of meanings, both lovely and warming. It represents the season of flowers, growth and love, and also when the days are at their longest of all the seasons of the year. The answer to the question is given on the next line 'Thou art more lovely and more temperate:' As there is a colon at the end it indicates that the next six lines are going to expand on this statement. Then Shakespeare pronounces that his love is superior to a summer's day as it will last forever. In the first line of the third quatrain Shakespeare says: "But thy eternal summer shall not fade." The phrase 'eternal summer' is in itself difficult to understand because summer is not eternal and the first time you read this line you think that it means that she will never die. The couplet then changes your mind completely, and you understand the use of this phrase. "So long lives this, and gives life to thee." This line explains that although she won't actually live forever the poem will always keep her memory alive. ...read more.

This appeals to the reader's imagination and helps them to create the picturesque place as he remembers it in their own head. In several of the lines, for example, 'That bathe the brown blades of the bending grasses', 'laugh and love' and 'watch with wonder-eyes' the poet uses alliteration to immerse the reader into the scene of gentle flowing water. In the second quatrain the verb 'loiter' in the first line creates an image of time slowing down. Repetition of the title opens the final quatrain as he appeals to our sense of hearing in describing Jamaican music as 'the fiddle and fife.' The final couplet is both the repetition of the first line using 'again' in a different position and the introduction of a new thought and feeling. Also the line 'To ease my mind of long, long years of pain' the word 'long' is again repeated to emphasize the time he has been away and the suffering he has experienced as a Black in a 'White' world. The tightness, compression and discipline of the sonnet form does not disguise but rather emphasises his love for Jamaica and his suffering since he left. In conclusion therefore, the sonnet has developed from its traditional form albeit still retaining some of the aspects Petrarch may have once used centuries beforehand such as an octave/sestet structure. It was originally a formal love 'song' with high ideals and a rigid format. Shakespeare transformed it and made the sonnet more accessible and fun for the common man to enjoy. The sonnet has since evolved further and can be used in a wide variety of forms and for an even wider range of subject matter and can be easily read by audiences world-wide. ?? ?? ?? ?? 1 By Chris Davies ...read more.