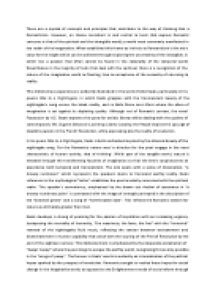 The spiritual and intangible world is central to Romanticism, yet real world experience is necessary. Discuss giving examples

﻿There are a myriad of concepts and principles that contribute to the way of thinking that is Romanticism. However, on theme consistent in and central to texts that express Romantic concerns is that of the spiritual and the intangible world; a world most commonly manifested in the realm of the imagination. What established this theme as intrinsic to Romanticism is the era?s value for the insight which can be achieved through exploring the uncertainty of the intangible, in which lies a passion that often cannot be found in the rationality of the temporal world. Nevertheless in the majority of tests that deal with the spiritual, there is a recognition of the nature of the imaginative world as fleeting, thus an acceptance of the necessity of returning to reality. This dichotomous experience is evidently illustrated in the work of John Keats, particularly in his poems Ode to a Nightingale, in which Keats grapples with the transcendent beauty of the nightingale?s song versus the bleak reality, and La Belle Dame sans Merci where the allure of imagination is set against its depleting quality. Although not of Romantic context, the novel Possession by A.S. Byatt explores the quest for artistic liberty whilst dealing with the qualms of contemporary life. Eugene Delacroix?s painting Liberty Leading the People depicts the upsurge of idealistic passion in the French Revolution, while expressing also the reality of revolution. ...read more.

The description of ?La Belle? identifies her as a symbol of the alluring yet intangible nature of imagination. She is depicted as other worldly, a ?faery?s child? with ?wild, wild eyes? who entraps the knight with the temptation of her beauty. This is reminiscent of the theory of the sublime which re-emerged in the eighteenth century with the increasing exploration of the impact of the powers of the imagination on the workings of the mind. The theory concerns the magnitude of nature and the supernatural which has the ability to dissipate one?s cognition and rationality, while maintaining a magnetism. Immanuel Kant called this theory ?negative pleasure?, which is reflected in the intensity of the poems eight stanza which conveys Keats? recurring theme of the fine line between pleasure and pain within imagination. There is a suggestion of the lady?s danger, thus that of the spiritual, as she ?lulled? the knight to sleep, and consequently depletes his humanity, which is recognised in the exclamation ?woe betide!? By expressing the dangers of entrapment in the intangible world, Keats conveys the necessity of returning to the physical world. The painting, Liberty Leading the People by Eugene Delacroix us one other text that encapsulates the transformative powers of the imaginative world. The painting was a response to the political upheaval that arose as a result of the overthrow of Charles X. ...read more.

While Maud fragments her identity to maintain “self-possession”, preoccupied with the “thresholds” of Christabel’s poetry, Roland must liberate himself from the rigid conventions of “stringent” scholarship to “relume” the fire of his creative drive. The characters tensions parallel the pathway of imaginative vision, which from a Romantic viewpoint must begin with a sense of discord. The prompt for the artistic journey is a recognition of the value for imagination, which is found through engaging with history, thus the novel merges künstleroman with the quest genre, where history illuminates the artistic journey to creative discovery. In order to facilitate change within her characters, Byatt dislocates them from the norm; Maud from her isolating “Tennyson Tower” and Roland from the dispiriting flat and Val. The setting of “Seal Court” where the letters are discovered connotes the Romantic value for nature as a locus for creativity. Nature seems to overwhelm the ruined castle and surrounds, with “villages...buried in the valleys”, conveying the necessity of shedding society’s constructs to reshape one’s consciousness. The physical journey to Yorkshire is another venture into nature that mirrors the emotional journeys of Maud and Roland. They imitate Randolph Henry Ash’s quest for knowledge which caused a “shift” in his poetry, incidentally redefining their own identities. What distinguishes Maud and Roland from Cropper’s tracing of the journey is that while Cropper aims to experience strictly through Ash’s eyes, they glean “something new” which informs their own creative processes, illustrating the Romantic value for individual experience in order to express the creative self. ...read more.