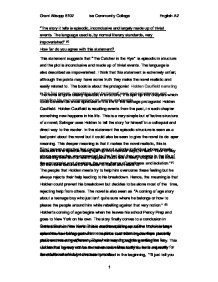 &quot;The story it tells is episodic, inconclusive and largely made up of trivial events. The language used is, by normal literary standards, very impoverished&quot; (5) How far do you agree with this statement?

"The story it tells is episodic, inconclusive and largely made up of trivial events. The language used is, by normal literary standards, very impoverished" (5) How far do you agree with this statement? This statement suggests that "The Catcher in the Rye" is episodic in structure and the plot is inconclusive and made up of trivial events. The language is also described as impoverished. I think that this statement is extremely unfair; although the points may have some truth they make the novel realistic and easily related to. The book is about the protagonist Holden Caulfield narrating in the first person, describing what he himself sees and experiences and providing his own commentary on events and people. The novel is quite clearly episodic in structure; it is split up into chapters which could be seen as small episodes in the life of the teenage protagonist Holden Caulfield. Holden Caulfield is recalling events from the past, in each chapter something new happens in his life. This is a very simple but effective structure of a novel; Salinger uses Holden to tell the story for himself in a colloquial and direct way to the reader. In the statement the episodic structure is seen as a bad point about the novel but it could also be seen to give the novel its deeper meaning. This deeper meaning is that it makes the novel realistic, this is because life is episodic being split up into hours or days, in each hour or day something new and different happens much like in every chapter in the novel. ...read more.

Looking at an average teenage life we could predict that most of these things were going to happen, just not over such a short space of time. Holden comes across as a very social person when he meets new people. Though we cannot trust what Holden tells us as it is entirely his views, he may be telling us lies. He is also an insecure person when his breakdown is taken into consideration. "A beautifully crafted, honest depiction of adolescent confusion and angst, Catcher in the Rye can be read on many levels. Holden is one of literature's most memorable characters."(3) This statement is very true as it is because of how Salinger created Holden that people see the events as trivial. If he was not a confused teenager then all of the events would be interpreted differently. It is because of Holden's age and the way he is that the events are seen as trivial. If it was stated that Holden's mental state is deteriorating then we would expect the events, as we are not told this they are seen as trivial. Holden is by all means a very intelligent teenager who seems to have suffered quite a lot. It is for this reason that we can sympathise with Holden's mental deterioration. Holden doesn't seem to be interested in material possessions and carries out very un-American activities, such as giving his items and money away. Holden doesn't care too much for possessions he says," Almost every time someone gives me a present, it ends up making me sad." ...read more.

We sometimes feel what Holden feels and we can relate to some of his actions and thoughts. Another point which arises is, "Is Salinger aiming for realism or mocking Holden?" It is true that Salinger is mocking Holden. Salinger is actually using Holden to express his own opinions; he gets his views on society and life across through a teenage boy's development from childhood. I feel that all of Holden's opinions on capitalism, America and life are in fact what Salinger is thinking. I believe that this is the only way he could express his opinion. This is why the book was banned in America. I have concluded that the language is not actually impoverished. I feel it is unfair to say that the language is impoverished compared to literary standards of the time. I think that the language used is very well thought and structured, Salinger was aiming for a realistic feel for the reader and even today people can relate to the book, "Enhanced by the teenage slang of the 1950's, it is a widespread belief that much of Holden Caulfield's candid outlook on life reflects issues relevant to the youth of today." (2) The statement is completely outrageous in its views on structure and language in the novel. It is obvious that a lot of thought has gone into the novel and the character of Holden. It is for this reason that I agree points about the structure but not those about the language. The points I agree with are that of the novel being episodic, inconclusive and made up of trivial events, although it is these factors which make the novel so easy to read follow and relate to. ...read more.