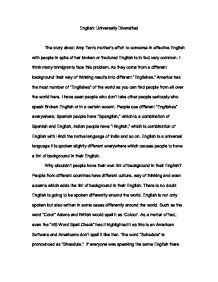 The Story of Amy Tan

English: Universally Diversified The story about Amy Tan's mother's effort to converse in effective English with people in spite of her broken or fractured English is in fact very common. I think many immigrants face this problem. As they come from a different background their way of thinking results into different "Englishes." America has the most number of "Englishes" of the world as you can find people from all over the world here. I have seen people who don't take other people seriously who speak Broken English or in a certain accent. People use different "Englishes" everywhere; Spanish people have "Spanglish," which is a combination of Spanish and English, Indian people have "Hinglish," which is combination of English with Hindi the native language of India and so on. English is a universal language it is spoken slightly different everywhere which causes people to have a tint of background in their English. Why shouldn't people have their own tint of background in their English? People from different countries have different culture, way of thinking and even accents which adds the tint of background in their English. ...read more.

There are some people who get affected by difference in English; they are usually students from other countries studying in American Schools. These students often struggle with grades in English in American Schools, which is due to different Englishes. Amy Tan talks about how she struggled with grades in English and got by easily in Math and Science. This is true in the case of Asians as they have natural inclination towards technical subjects. The worlds leading Electronic and IT companies are loaded with Asians due to their natural ability. Asians in American Schools are usually steered away from writing towards Math and Science, which is why there aren't many Asians Americans representing American literature. Amy Tan was a victim of such steering towards math and science. Amy Tan was told by her former boss that English writing was not her best skill and she should hone her talents towards account management. But she took all of the disproving assumptions that people made of her in a rebellious way and she over came it and succeeded. ...read more.

I had to prove a point that people can be well acquainted with English even if their first language is not English. Like Amy Tan I didn't exactly have any kind of shame in my story, as she feels a sense of shame and pride in her story. She feels shame because of her mother's broken English and pride as it's because of her she is a renowned writer; it's because of her she became rebellious in her life, wanting to accomplish something, prove something! And she succeeded in her life she achieved what she wanted to achieve. Although, I did have some pride in my story as I managed to change lot of people's opinion and made good friends for life and had one of the greatest time of my life in Canada. I would conclude by saying that although English is diversified around the world due to language attitudes, difference in accent, background, "Englishes" or even unawareness to some extent, It's still the most communicable or reachable language in the world. I feel English is more or less like cooking; the taste of the same food differs from region to region and every region adds its own flavor to it. ...read more.