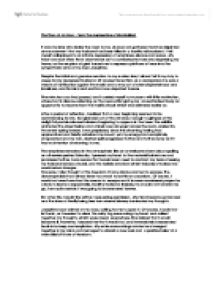 The Story of an Hour – from the perspective of Mrs Mallard

It was my sister who broke the news to me. As soon as I gathered from her disjointed announcement that my husband had been killed in a horrific rail accident, I felt myself collapsing into an infinite depression of emptiness, silence and sorrow. My heart and soul were thrust downwards as if a cumbersome mass was depressing my frame, as the eruption of grief forced me to express a plethora of tears into the sympathetic arms of my dear Josephine.

Despite the initial and genuine reaction to my sudden loss, I almost felt it my duty to weep for my deceased husband. Of course I loved him, as a companion; he was a means of fortification against the world and a way out of eternal spinsterhood and loneliness, and his mind and soul had now departed forever.

Five minutes or so had passed, and I carried myself to my room with little motivation, where I sat in silence, reflecting on the news whilst giving my anaesthetised body an opportunity to recover from the horrific shock which was delivered earlier on.

After a period of reflection, I realised that a new beginning seemed to be commencing for me. As I glanced out of the window, I caught a glimpse of the delightful pastel-coloured blossom beginning to appear in the trees. The wildlife animated the street below and a lively new air swept across the room, carried by the sweet spring breeze. I was perplexed, since this charming feeling had approached and briefly refreshed my mood; yet my energy had completely evaporated and my torn, slashed spirit progressed further and further away as if it had no intention of returning to me.

The emptiness remained in the atmosphere like an unwelcome storm cloud spoiling an otherwise perfect blue sky. I pressed my head to the material behind me and pondered further. I was aware that I would soon need to confront my fears of seeing my husband before a burial, and the terrible emotions which viciously attacked me would return stronger.

However, I also thought of the freedom; I have always wanted to escape. The claustrophobia had almost been too much to battle on occasions. Of course, I would not ever have had the means to escape and it is never considered proper for a lady to leave a respectable, healthy husband. Besides, he would not have let me go, I am quite certain. I was going to be ensnared forever.

But after this, I could live without requesting permission. My mind became entranced and the idea of finally being free from eternal slavery dominated my thoughts.

Josephine soon arrived at my door, calling for me to open it. Of course, I could not let her in, as I needed to clear the misty fog surrounding my head and collect together my thoughts, which were strewn everywhere. She insisted that I would become ill. However, I assured her that I would not, and immediately I descended back into deep contemplation. My entire surroundings rotated and merged together in my mind, as I managed to absorb a new soul and a positive belief of a more blissful future of freedom.

I left the room after my courage was gained enough to for my legs to stand my weight and clasped to Josephine’s wrist. She led me down the staircase to where Richard was stood, and there appeared to be someone entering the house. My curiosity compelled me to glance over at the gentleman, but as I did, I recognised his face. I then realised that this gentleman was my husband. Everlasting amounts of air flooded into my lungs, as my expanding heart was speared by the savage storm of shock and dismay.