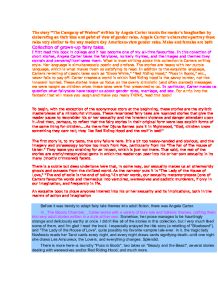 The story &quot;The Company of Wolves&quot; written by Angela Carter taunts the reader's imagination by elaborating on their idea and point of view of gender roles.

The story "The Company of Wolves" written by Angela Carter taunts the reader's imagination by elaborating on their idea and point of view of gender roles. Angela Carter's characters portray these roles very similar to the way modern day Americans view gender roles. Males and females are both Collection of grown-up fairy tales. I first read this book in college and it has become one of my all-time favourites. In this collection of short stories, Angela Carter takes the fairytales, nursery rhymes, and the images and themes they contain and perverts/illuminates them. What is most striking about this collection is Carters writing style. Her language is simultaneously poetic and profane. The stories are heavy with her purple language, which is what makes them so satisfying to read. In additon to the exquisite language, Carters re-telling of classic tales such as "Snow White," "Red Riding Hood," "Puss in Boots," etc., never fails to pay off. Carter creates a world in which Red Riding hood is the savvy hunter, not the innocent hunted. These stories make us focus on the overly simplistic (and often slanted) messages we were taught as children when these tales were first presented to us. In particular, Carter makes us question what fairytales have taught us about gender roles, marriage, and s*x. For a trip into the fantasic that will make you laugh and make you really THINK, read this book! To begin, with the exception of the eponymous story at the beginning, these stories are the stylistic masterpieces of a miniaturist virtuoso. These renarrated fairy tales are nuanced stories that give the reader pause to reconsider his or her sexuality and the inherent violence and danger attendant upon it.-And then, perhaps, to reflect that the fairy stories in their original form were less explicit forms of the same thing for children....As the writer Djuna Barnes puts it in Nightwood, "God, children know something they cant tell; they like Red Riding Hood and the wolf in bed!" ...read more.

Carter takes black and white fairytale characters and attempts to express them in modern, human terms. It doesn't quite work and we are left with the feeling of having read some naughty stories for Adults, based on stories for kids. gemini2003, please do not redistribute this hypothesis. We work very hard to create this website, and we trust our visitors to respect it for the good of other students. Please, do not circulate this hypothesis elsewhere on the internet. Anybody found doing so will be permanently banned. Well, maybe tha's the point... Maybe she wanted us to think about it: what's a character? What do you mean when you say a character has soul or psychological depth or consistency? And what about people? Could some people be as two-dimensional as fairy-tales characters? For example, because they just play the role everybody expects them to play, without even being aware of it? If this isn't clear, think of Stephen (if I remember his name correctly - the guy who started this dicussion), he is the perfect example of a stock-character. He makes me feel like I've known him all my life, unfortunately... I think Angela Carter did not only aim at being "naughty" (or do you actually mean "a pervert"?) when she wrote The b****y Chamber, I think she wanted to shock the reader into realizing that what we call reality is not given, but shaped by ideas that are forced on us, from the cradle, and presented to us as "truth", even through fairy-tales. ex: "stories for kids" ? Do you mean innocent stories, as opposed to "naughty" ones? How come these innocent stories have so much violence in them? But then again, I'm not saying Angela Carter had all the answers . At least, she asked the questions... no wonder people who take their own superiority for granted don't like her writing ! ...read more.

Angela Carters use of desperate circumstances transforms the fairy tale conventions beyond its boundaries and into the realm of gothic fantasy. Carter also uses sustained periods of tense feelings to create an atmosphere of pressure fear. Also by adding horrific detail and descriptive references to sexuality the story no longer fits into the classic fairy tale genre. Angela Carter makes good use of narrative, plots, imagery and language to create scenes in horrific detail that helps to capture the reader's attention. Angela Carter also uses unpromising situations in 'The Tigers Bride� to capture the audience. The Tigers Bride is a reworking of beauty and the Beast. Angela Carter tries to engage the reader by using language and imagery; in fact the daughter is not disgusted by the tiger but by his mask. Carter also uses alliteration with the soft sound of s making the description of the beast sound comforting where in reality he is far from it, "He must bathe himself in scent, soak his shirt...." The heroines� reaction to the beasts� situation is pity and she confronts her fear by exposing herself to the beast as well. The actual moment of the tiger's nakedness has a powerful impact on beauty. This can be supported by, "The annihilating vehemence of his eyes, like twin suns." Beauty's response to the beast's naked form is, "I felt my breast's ripped apart as if I suffered a marvellous wound." The final transformation occurs when Beauty joins the tiger in his own environment, where the laws of the material world have no meaning. This is a key point where all the disturbed emotions become resolved. This can be proven when beauty says, I, white, shaking, raw approaching him as if offering, in myself, the key to a peaceable kingdom in which his appetite need not be my extinction. Carters use of a desperate situation where the heroine is not a victim but a character that is strong and in control, takes this story away from the traditional convention of fairytales. Also Beauty's transformation takes this genre into the realm of fantasy. ...read more.