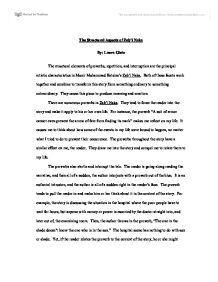 The Structural Aspects of Zab'i Naka

The Structural Aspects of Zab'i Naka By: Laura Gintz The structural elements of proverbs, repetition, and interruption are the principal artistic characteristics in Munir Muhammad Katsina's Zab'i Naka. Both of these facets work together and combine to transform this story from something ordinary to something extraordinary. They cause this piece to produce meaning and emotion. There are numerous proverbs in Zab'i Naka. They tend to force the reader into the story and make it apply to his or her own life. For instance, the proverb "A suit of armor cannot even prevent the arrow of fate from finding its mark" makes me reflect on my life. It causes me to think about how some of the events in my life were bound to happen, no matter what I tried to do to prevent their occurrence. The proverbs throughout the story have a similar effect on me, the reader. They draw me into the story and compel me to relate them to my life. The proverbs also startle and interrupt the tale. ...read more.

The proverb can also work to push the reader away because it does disrupt the natural flow of the story. Rather than continuing on with discussing the hospital scene, the author interrupts the story with a proverb. Thus, the proverbs can have the duality of both pulling the reader in and pushing the reader away. The many proverbs play an important structural role in the tale. Although there are a lot of proverbs in Zab'i Naka, they are absent from end of the story. They seem to stop when the war starts. The proverbs form a skeleton of part of the story. They are very packed in, and a very prominent feature of the structure in the beginning. The complete absence of them in the end drastically changes the composition, consequently changing the emotion of the story. The absence of the proverbs makes the story keep going on without them acting to pull the reader in or push the reader away. The proverbs, and lack thereof, shape the meaning and emotions of the piece. ...read more.

These themes are repeated to accentuate the meaning of the story. The repetition of both the proverbs and the themes in the story creates layers. The layering gives depth and texture to the story. Having the obvious story, then other themes and issues woven in creates the layering. The layering is an embellishment - taking something and adding a dimension to it. This tends to instill a sense of wholeness in the reader. The layers of the story make it complete. I believe that interruption also makes the story extraordinary. The proverbs themselves are an interruption of the storyline. The repetition of the pattern of the story, then a proverb, then back to the story is also interrupted by the absence of the proverbs in the second part of the story when the war occurs. The rhythm of the story is interrupted by the lack of proverbs. This constant disturbance throughout the story creates a multitude of layers, making the story more whole. The combination of interruption, layering, repetition, and proverbs make Zab'i Naka the incredible work of art that it is. They add meaning and emotion to the story and also make it complete. These artistic characteristics have thoroughly deepened the story and made it interesting. ...read more.