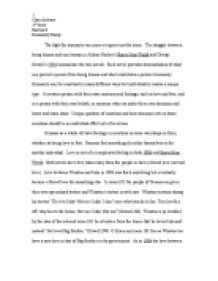 The struggle between being human and non-human in Aldous Huxleys Brave New World and George Orwells 1984 summarizes the two novels.

﻿Chris Siebert 1st hour Barnard Humanity Essay The fight for humanity can come at a great cost for some. The struggle between being human and non-human in Aldous Huxley?s Brave New World and George Orwell?s 1984 summarizes the two novels. Each novel provides demonstration of what can prevent a person from being human and what constitutes a person?s humanity. Humanity may be construed in many different ways but individuality creates a unique type. It creates a person with their own emotions and feelings, such as love and fear; and or a person with their own beliefs, or someone who can make there own decisions and know and share ideas. Unique qualities of emotions and how someone acts on those emotions should be an individual effort not a forced one. Humans as a whole all have feelings or emotions in some way shape or form, whether its being love or fear. Humans feel something for either themselves or for another individual. Love is sort of a complicated feeling in both 1984 and Brave New World. Both novels have love taken away from the people or have a forced love (not real love). Love between Winston and Julia in 1984 was thick and strong but eventually became a forced love for something else. ...read more.

and to take down Big Brother. Winston agrees to all of O? Brien?s questions to join the Brotherhood overcoming his fear of the Party and Big Brother. But the fear the Party creates does overcome the Proles and other people of Oceana. Just like Bernard in Brave New World the people of Oceana in 1984 are so scared into fearing the government and what the government can do. Children in 1984 are brainwashed to rat out anyone, including their parents, who even think that the government could be wrong. When Winston goes over to the Parsons apartment to help Mrs. Parsons with their sink her children greet Winston with ?You?re a traitor! You?re a thought-criminal! You?re a Eurasian spy! I?ll shoot you, I?ll vaporize you, I?ll send you to the salt mines!? (Orwell 23) The children believe Winston to be a thought criminal and caused a crime to the Party which Winston is, and the Party has brainwashed the children of Oceana to help notice the thought criminals and catch the criminals. The whole time while Mrs. Parsons children are calling Winston a traitor she is too fearful of saying anything to them because she is in fear that she will be convicted by her own children. ...read more.

But unlike John, the non-human Mond believes that people should always be happy and should never have to hurt even if those feelings are controlled. Both John and Winston fall to non-humanism in the end when both are forced to give up their individuality. In Brave New World John is the Savage because he wasn?t like everyone else who was born in an incubator without a mother or father that or that was brainwashed to like or do something. Unlike John who is human and makes his own decisions the children are forced as babies too like certain things depending on what class and job they have. Humans think for themselves, the decisions and ideas they have either make them human or non-human. Both 1984 and Brave New World has conflict between humanism and non-humanism. Characters such as John and Winston make their own decisions, think for themselves and act on emotions and feelings they have proves their individuality in their lives. The individualism can come from anyone such as the Proles and is possible in everyone but some are forced to not be an individual. Both novels have humanity controlled by overpowering governments but both in different ways and beliefs. Each novel has non-humanism defeat humanism even though human characters try to change the government?s force of non-humanism and what feelings are needed for someone to be human and what can prevent someone from being a human. ...read more.