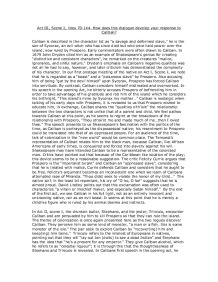 The Tempest Act III, Scene ii, lines 70-144. How does this dialogue develop your response to Caliban?

Act III, Scene ii, lines 70-144. How does this dialogue develop your response to Caliban? Caliban is described in the character list as "a savage and deformed slave," he is the son of Sycorax, an evil witch who has since died but who once held power over the island, now ruled by Prospero. Early commentators were often drawn to Caliban. In 1679 John Dryden cited him as an example of Shakespeare's genius for creating "distinctive and consistent characters", he remarked on the creatures "malice, ignorance, and sinful nature." Dryden's emphasis on Caliban's negative qualities was not all he had to say, however, and later criticism has demonstrated the complexity of his character. In our first onstage meeting of the native on Act I, Scene ii, we note that he is regarded as a "beast" and a "poisonous slave" by Prospero. Also accusing him of being "got by the devil himself' upon Sycorax, Prospero has forced Caliban into servitude. By contrast, Caliban considers himself mistreated and overworked. In his speech in the opening Act, he bitterly accuses Prospero of befriending him in order to take advantage of his gratitude and rob him of the island which he considers his birthright, "This island's mine by Sycorax my mother..." ...read more.

to see a dead Indian" and Stephano has the idea that "he's a present for any emperor." They give Caliban alcohol, which he refers to as "celestial liqueur"; it is through this that the thoughtlessness of Steohano and Trinculo is revealed. In Calibans first speech in the opening act, he makes reference to Prospero giving him "water with berries in't" although some critics believe this to be wine, it seem unlikely that Prospero would give the native alcohol, as Calibans reaction to the wine in this act suggests that he has never before experienced it. Caliban shows foolishness and naivety in bowing to Stephano as his new master, who grows in his ambitions to kill Prospero. The plan to "knock a nail into his head" seems almost laughable when set in contrast to the subtlety and cunning of Antonio and Sebastian, who use the euphemism of sleep to communicate their plot to usurp the king. Just before the beginning of the extract, Caliban gives his allegiance to Stephano but responds in a childlike way to Trinculo, calling him a "scurvy patch." This gives Ariel a chance to take advantage of the situation and play a trick, casting Trinculo out of the trio and strengthening the relationship between Caliban and his new master. ...read more.

Caliban dreams that the clouds "would open, and show riches Ready to drop upon me". The term "riches" may be a metaphor for freedom, and similar to Antonio's vision of the crown "dropping upon thy head", the riches "drop" onto Caliban, symbolizing the simplicity of attaining his dream. Unfortunately, Calibans Speech falls on deaf ears, and Stephano and Trinculo remain untouched by his words. As the scene closes, the audience feels ambivalence towards Caliban. On one hand, we feel sympathy for his claim "this island's mine" as his feelings for the island are revealed. We sense that he feels regret for Prospero's withdrawal from him. However, the attempted rape of Miranda and his total lack of remorse cannot be forgotten. Caliban has remained one of the most compelling characters in The Tempest, and has elicited a large portion of the critical interest in the play. It is not easy to decipher weather or not he is a monstrous native or just a na�ve figure with no experience of human morals. The critic G.L. Horton points out Caliban's poetic imagination, his childlike eagerness make it near impossible for us to see Caliban as an evil figure. The extract develops our response to the character, making us inclined to agree with Horton. ...read more.