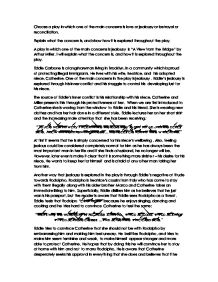 The theme of jeaslousy in 'A View from the Bridge'

Superficially, Eddie dislikes him as he believes that he just wants his passport, but the reader is aware that Eddie sees Rodolpho as a threat. Eddie feels that Rodolpo "aint right" because he enjoys singing, dancing and cooking and he tries hard to convince Catherine to feel the same: "That's why the waterfront is no place for him... if I could cook, if I could sing, if I could make dresses ... I would be like in a dress store." Eddie tries to convince Catherine that she should not be with Rodolpho by embarrassing him and making him feel uneasy. He belittles Rodolpho, and tries to make him seem feminine and weak, to make himself appear stronger and more able to protect Catherine. He hopes that by doing this he will convince her to stay at home with him and not to marry Rodolpho. He is aware that Catherine desperately seeks his approval in everything that she does and believes that if he makes it clear that he disapproves of Rodolpho, Catherine will no longer want to be with him. ...read more.

He told the story to highlight the importance of loyalty to family and immigrants in their community: "You'll never see him no more, a guy do a thing like that? How's he gonna show his face?" He is disgusted at Vinny's behaviour and he makes it clear to Catherine that this is something that their community is completely against. The fact that he is so critical of Vinny's actions shows that his similar actions were driven completely by jealousy. He knew that he would face similar consequences but his l**t for Catherine had completely taken over and made him betray himself - the good man that he used to be. Eddie's jealousy is a main concern in the play and it is explored through conflict between him and many characters in the play, including himself. Eddie's increasing jealousy and selfishness causes a tragic ending to the play for many characters. The jealousy explored makes the play more interesting and enjoyable and increases the readers understanding of Eddie's feelings and of the play as a whole. ...read more.