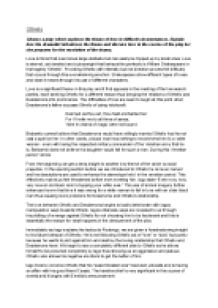 The Theme of Love in &quot;Othello&quot;.

﻿Othello Choose a play which explores the theme of love in difficult circumstances. Explain how the dramatist introduces the theme and discuss how in the course of the play he/she prepares for the resolution of the drama. Love is force that overcomes large obstacle but can easily be tripped up by small ones. Love is eternal, yet derailed and a playwright that betrays this perfectly is William Shakespeare in his tragedy ?Othello?. Providing Othello with intensity but not direction proves the difficulty that occurs through this overwhelming emotion. Shakespeare show different types of loves and what it means through his use of different characters. Love is a significant theme in this play and it first appears in the meeting of the two search parties, each seeking Othello for a different reason thus bringing the relations of Othello and Desdemona into prominence. The difficulties of love are seen to begin at this point when Desdemona?s father accuses Othello of using witchcraft: Damned as thou art, thou hast enchanted her: For I?ll refer me to all thins of sense, f she in chains of magic were not bound Brabantio cannot believe that Desdemona would have willingly married Othello had he not cast a spell on her. ...read more.

The love between Othello and Desdemona begins to badly deteriorate with Iagos manipulative ways towards Othello. Iagos villainess ways are revealed to us through his plotting of revenge against Othello for not choosing him to be lieutenant and this is essentially the reason for what happens in the denouement of the play Immediately as Iago explains his tactics to Roderigo, we are given a foreshadowing insight to his future betrayal of Othello. He is not following Othello out of ?love? or ?duty? but purely because he wants to plot against him and destroy the loving relationship that Othello and Desdemona have. We begin to see a completely different side to Othello as he allows himself to be poisoned completely by Iago thus showing us an aggressive and jealous Othello who allows his negative emotions to get the better of him. Iago tries to convince Othello that his ?sweet Desdemona? has been unlawful and is having an affair with his good friend Cassio. The handkerchief is very significant in this course of events and it begins with Emelia?s announcement: I am glad I have found this napkin. ...read more.

Othello covers the terribleness of what he is about to do with the use of many of these poetical metaphors thus showing the viewer that he is still in love with her. After smothering her he does not want to admit that Desdemona is dead; he speaks to her, ponders her stillness, and seems very hysterical. He is also grieved by this action and says "methinks it should be now a huge eclipse of sun and moon," this refers back to the light/dark imagery of the play to communicate how unsettled and unhinged he feeling at that moment and he ends up committing suicide. The fall of a proud and dignified man because of some difficult circumstances that is involved with loving someone elevates some pain in the viewers. Shakespeare has successfully written a play that is somewhat relatable to today?s public. If there is something that you are so passionate for you try your best to keep and not allow difficulties affect it, but sometimes that is not possible and whatever it is, it has to be let go. ...read more.