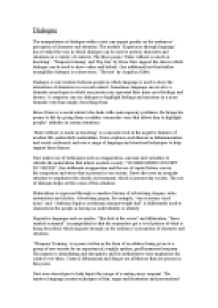 The three poems Enter without so much as knocking, Weapons training and Big Jim by Brice Daw support the idea in which dialogue can be used to show values and beliefs

﻿Dialogue The manipulation of dialogue within a text can impact greatly on the audiences? perception of character and situation. The module ?Experience through language? has revealed the way in which dialogue can be used to portray characters and situations in a variety of contexts. The three poems ?Enter without so much as knocking?, ?Weapons training? and ?Big Jim? by Brice Daw support the idea in which dialogue can be used to show values and beliefs. One additional text that further exemplifies dialogue is a short story, ?The test? by Angelica Gibbs. Dialogue is conversation between people in which language is used to show the interaction of characters in a social context. Sometimes language can involve a dramatic monologue in which one person may represent their inner most feelings and desires. A composer can use dialogue to highlight feelings and emotions in a more dramatic way than simply describing them. ...read more.

His manner is intimidating and derogatory and his authoritative tone emphasises his control over them. Control, debasement and danger are all themes that are present in this poem. Daw uses stereotypes to help depict the image of a ranting army sergeant. The emotive language creates techniques of fear, anger and frustration and personalised attacks such as ?are you q***r?? increases the sense of menace and vulgarity. These techniques are effective in characterising the sergeant and making the audience feel uneasy. Word choice is a particularly valuable technique in this poem. The terminology while simple is packed with double meaning that helps develop a pervading negative atmosphere. Monosyllabic words such as ?click?, ?q***r? and ?t*t? give the poem a blunt and direct feel while polysyllabic words including ?b****y? add layers of meaning. Various language techniques are further expressed in ?Weapons Training?. Limited punctuation, instructional and colloquial language along with an imperious tone gives the poem a forceful, authoritative resonance. ...read more.

This technique is effective in showing the attitudes and beliefs of the instructor, the beliefs that all black people came from slave origin and it shows his prejudices. The use of southern drawl is evident when the instructor breaks into ?dog my cats if I didn?t think y?all came from down yonder? , this shows the prejudices the instructor has as he assumed Marian is a poor black woman from slave origins in the south of the United States. Mrs Erickson, Marian?s employer genuinely likes Marian, but language is used to show the inequality between them. For example Marian calls her employer ?Mrs Erickson? and ?Ma?am?. Dialogue has been used vastly in this story to reveal certain characters in given circumstances; it reveals the prejudices and inequalities between each of the three characters. Both composers discussed above have manipulated dialogue and used a range of techniques in their texts. These paint a certain picture in the audiences? mind and can alter their perception of character and situation ...read more.