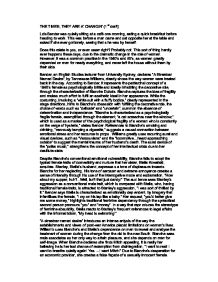 The Times, they are a'changin. Views of women in A Streetcar Named Desire, The Female Eunuch and the film Shirley Valentine.

THE TIMES, THEY ARE A' CHANGIN' (1st draft) Lois Bender was quietly sitting at a caf� one morning, eating a quick breakfast before heading to work. This was before a man came and sat opposite her at the table and asked if she ever got lonely, seeing that she was by herself. Does this relate to you, or even seem right? Probably not. This sort of thing hardly ever happens these days, due to the dramatic change in the role of women. However, it was a common practice in the 1940's and 50's, as women greatly depended on men for nearly everything, and never left the house without them by their side. Bender, an English Studies lecturer from University Sydney, declares "A Streetcar Named Desire", by Tennessee Williams, clearly shows the way women were treated back in the day. According to Bender, it represents the patriarchal concept of a 1940's female as psychologically brittle and ideally inhabiting the decorative role, through the characterization of Blanche Dubois. Blanche captures the idea of fragility and makes much effort to fulfil an aesthetic ideal in her appearance. While the costuming, involving a "white suit with a fluffy bodice," clearly represented in the stage directions, hints to Blanche's obsession with fulfilling the decorative role, the choice of words such as "delicate" and "uncertain", summon the absence of determination and independence. ...read more.

But it wouldn't be make-believe, if you believed in me." When Mitch confronts Blanche because of Stanley's malicious revelations about her character, Blanche admits her lies are necessary, and that she detests reality and encourages "magic." Because Blanche cannot see around her dependence on men, she has no realistic inception of how to save herself. Blanche does not notice that her dependence on men, will result her destruction and not her redemption. By depending on men, Blanche is placing her destiny in the hands of others. Professor of Cultural Studies, Mamie Grubb, from UNSW, believes "The Female Eunuch" successfully demonstrates the rejection of particular women to the roles they were expected to fulfil during the transitional period, of the 1960s. "It captures the idea that conventional women lack potential and power," Grubb says. Germaine Greer's short speech portrays her repulsion of the conventional gender roles and the socially imposed conceptions of what it meant to be female. Greer uses the term "masquerade" as a metaphor for socially constructive roles, and the repetition, of "I'm sick of...", reinforces a tone of contempt and disgust towards traditional gender expectations. Greer expresses opposing values to those of Blanche Dubois, "I'm sick of pretending eternal youth." ...read more.

This is exemplified through her relationship with Costas, and her ability to separate the pleasure of the moment from any emotional attachment to her partner, "given the amount of time you spend on your brother's boat." The voiceover, "you belong back here," accompanied by a long shot of Shirley on a motorbike, creates a sense of liberation and a suggestion of the expansiveness and broadened horizons of her life now that she has shaken off the shackles of patriarchy, "The only holiday romance I've had is with myself." This quote suggests that she is no longer a male identified woman, and refuses to achieve social significance through her relationship with a man. Shirley Valentine has finally rejected the ancient values of patriarchal society, and has opened her eyes to the wondrous excitement life can bring, if you choose to live it. Ladies? No. We are not the submissive, delicate and irrational race that once upon a time strutted the streets of town. We are women ... we are girls. "It is thanks to people like Germaine Greer, who stood up and exposed the utter disgrace surrounding the patriarchal view of the dominant male, and the dependent, delicate female," Bender says, "My independence doesn't hinder anything I do. I don't need a man to stand by and protect me. I am a contemporary woman, and contemporary women live life." Stephanie Recking ...read more.