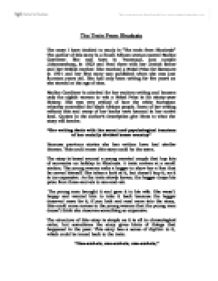 The Train From Rhodesia - review

The Train From Rhodesia The story I have decided to study is "The train from Rhodesia" The author of this story is a South African woman named Nadine Gordimer. She was born in Transvaal, just outside Johannesburg, in 1923 and lived there with her Jewish father and her British mother. She received a Nobel Prize for literature in 1991 and her first story was published when she was just fourteen years old. She had only been writing for five years as she started at the age of nine. Nadine Gordimer is admired for her modern writing and became only the eighth woman to win a Nobel Prize in its ninety-year history. She was very critical of how the white European minority controlled the black African people. Some of her writing reflects this and many of her books were banned in her native land. Quotes in the author's description give hints to what the story will involve. "Her writing deals with the moral and psychological tensions of her racially divided home country" Because previous stories she has written have had similar themes. This could mean this story could be the same. ...read more.

The author repeats the snake image by saying, "The train had cast the station like a skin" This gives me an image of a snake shedding its skin, but could also be a hidden message that as the white people go home on the train, their time in Africa and African people are left behind and they are erased from their memory because the white people don't need the Africans anymore. The main characters are the young woman, the young man and the beggar. The story doesn't tell us anything about these characters, not even their names. Maybe because the write wanted the train to be the main character, and by using personification, as she did, it could be possible that this is what she tried to achieve. From the text, you can see that the young man is very upper class, and looks down on the less fortunate, like the beggar. But the young woman is very down-to-earth and believes that although the beggar is poor, he deserves all the same respect. It doesn't tell us why the young couple were in Africa, but hints were given to think that they had just got married and then went on a honeymoon. "She was feeling like this again. ...read more.

If you read between the lines you realise that the author has made the train look like a character. By using personification and also using words that can mean the train is looking for something. Such as, "Dwindling" She also makes out that nobody is answering the trains calls, and that the train needs help, or maybe it's the people on the train that need help, or are not being answered, as they want to keep the false and happy life they have been living in Africa, instead of facing their problems and miserable lives back at home. "I'm coming . . . I'm coming . . ." I chose to write about "The Train From Rhodesia" because I like the way the author included hidden meanings and messages about Africans and the white people. Her beliefs and experience from growing up in South Africa has reflected in her writing. I like her use of personification towards the train and I also like the way she makes the characters feelings clear even though she has not explained it in great detail. She gives you the option of having your own story ending by not telling you the whole story, so you make parts of it up yourself. Julie White ...read more.