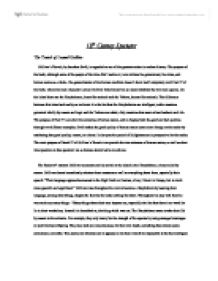 The Travels of Lemuel Gulliver.

18th Century Spectator The Travels of Lemuel Gulliver Gulliver's Travels, by Jonathan Swift, is regarded as one of the greatest satires in modern history. The purpose of the book, although some of the people of the time didn't realize it, is to critizise his government, his rulers, and human nature as a whole. His generalization of the human condition doesn't show itself completely until Part IV of the book, where the main character Lemuel Gulliver finds himself on an island inhabited by two main species. On the island there are the Houyhnhnms, horse-like animals and the Yahoos, human-like animals. The difference between this island and reality as we know it is the fact that the Houyhnhnms are intelligent, noble creatures governed wholly by reason and logic and the Yahoos are naked, dirty creatures that seem at best barbaric and vile. The purpose of Part IV is to show the extremes of human nature, and to display both the good and bad qualities through two different examples. Swift makes the good quality of human nature seem more foreign to the reader by attributing that good quality, reason, to a horse. ...read more.

He never takes off his clothes to reveal his likeness to the Yahoo body. The Houyhnhnms still regard Gulliver however as either a "noble Yahoo" or something in between a Yahoo and a Houyhnhnm, it seems they are unable to decide. At one point, one of the Houyhnhnms describes Gulliver's body to be extremely inefficient: "They said that I could not walk with any security, for if either of my hinder feet slipped, I must inevitably fall. They then began to find fault with other parts of my body, the flatness of my face, the prominence of my nose, my eyes placed directly in front, so that I could not look on either side without turning my head." The Houyhnhnm even goes as far as to give examples of how even the Yahoo has certain physical traits that better those of Gulliver. This conversation takes a direct shot at the period of Enlightenment when humans had great regard for themselves, their bodies, their minds, and their accomplishments. Later, Gulliver goes on to describe many things about humans in a greatly negative light. For example, the petty and barbaric reasons for war, the immoral ways people attempt to gain money, and how lawyers are hired to prove that white is black, and black is white. ...read more.

This is an unfair judgment and shows that Gulliver is not in his right mind, and therefore, should not be trusted in his assessment of the Houyhnhnms as perfect creatures that live in a perfect society. Through this mental decline of Gulliver, Swift is showing that although reason is a good quality for human nature to possess, it should not be taken to an extreme and nor should it be the only governing way of a society. Swift would like to see human nature ruled by reason for the most part (as the Houyhnhnms are), but with a slight bit of Yahoo traits as well. Swift succeeds in showing the flaws of human nature through a microscope in Gulliver's Travels. His two extremes show a greatly exaggerated view of mankind's faults. The entire book Gulliver's Travels has a natural progression heading towards Swift's main goal which is to show the flaws of human nature as a whole. Swift does not have a grim view of human nature. He is merely attempting to show the flaws of mankind and in order to achieve that he must exaggerate those flaws greatly to make them obvious to the reader. Swift is simply trying to set a goal that all mankind should attempt to become in his opinion, more ideal. ...read more.