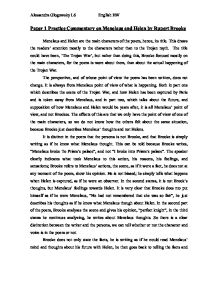 Paper 1 Practice Commentary on Menelaus and Helen by Rupert Brooke Menelaus and Helen are the main characters of the poem, hence, its title. This draws the readers' attention mostly to the characters rather than to the Trojan myth. The title could have been, 'The Trojan War', but rather than doing this, Brooke focused mostly on the main characters, for the poem is more about them, than about the actual happening of the Trojan War. The perspective, and of whose point of view the poem has been written, does not change. It is always from Menelaus point of view of what is happening. Both in part one which describes the scene of the Trojan War, and how Helen has been captured by Paris and is token away from Menelaus, and in part two, which talks about the future, and supposition of how Menelaus and Helen would be years after, it is all Menelaus' point of view, and not Brookes. ...read more.

In the second part of the poem, Brooke analyses the scene and gives his opinion, "perfect knight", in the third stanza he continues analyzing, he writes about Menelaus thoughts. So there is a clear distinction between the writer and the persona, we can tell whether or not the character and voice is in the poem or not. Brooke does not only state the facts, he is writing as if he could read Menelaus' mind and thoughts about his future with Helen, he then goes back to telling the facts and what actually happened when they got old, relating the facts, being omniscient and analyzing what happens, this enriches our comprehension about what is going on. The poem does not have a formal structure. Although we can depict some rhymes at the end of lines, they do not follow a regular pattern. There is also some sense of symmetry, for the stanzas are reasonably the same length. The poem is divided into two parts, the firs one which is a myth and the second one which is the reality. ...read more.