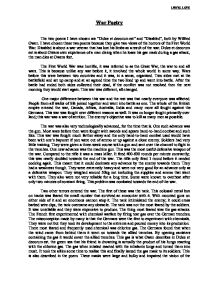 The two poems I have chosen are &quot;Dulce et decorum est&quot; and &quot;Disabled&quot;, both by Wilfred Owen. I have chosen these two poems because they give two views of the horrors of the First World War.

War Poetry The two poems I have chosen are "Dulce et decorum est" and "Disabled", both by Wilfred Owen. I have chosen these two poems because they give two views of the horrors of the First World War. Disabled is about a war veteran that has lost his limbs as a result of the war. Dulce et decorum est is about Owens own experience of a man dieing when he loses his gas mask during a gas attack, the man dies at Owens feet. The First World War was horrific, it was referred to as the Great War, the war to end all wars. This is because unlike any war before it, it involved the whole world in some way. Wars before this were between two countries and it was, in a sense, organised. Two sides met at the battlefield and set up camp and at an agreed time the two lined up and went into battle. After the battle had ended both sides collected their dead, if the conflict was not resolved then the next morning they would start again. This war was different, all changed. One major difference between this war and the rest was that nearly everyone was affected. People from all walks of life joined together and went into battle as one. The whole of the British empire entered the war, Canada, Africa, Australia, India and many more all fought against the Germans. This war was fought over different reasons as well. It was no longer fought primarily over land; this war was a war of attrition. The enemy's objective was to kill as many men as possible. The war was also very technologically advanced, for the time that is. One such advance was the gun. Most wars before then were fought with swords and spears hand-to-hand combat and such like. This war was fought much farther away and the only hand-to-hand combat used would have been with one's bayonet if you were out of ammo or up against a close enemy. ...read more.

"As under a green sea, I saw him drowning" This is the one line in my opinion that sums up what Owen saw of his friend through the hazed glass eyes on his mask. I would think that the way Owen was able to deal with the emotional pressure and strain he was put through until he died was to express himself in his poems. This is why they are so graphic and they leave nothing to the imagination. He wanted to express himself so deeply so that we would not need to imagine the horrors and I don't feel he wanted us to. To put thing into prospective again to see a man drowning in the remnants of his own dissolved lungs would send any man mad with this ghastly sight. The amount of people that died in the war was an astonishing number. Over eight million men died in the First World War. Compared with the Second World War this is minimal, 61 million men died in the Second World War. But this was the first of its kind and people weren't prepared for this significant death rate. They had no choice but to burry them quickly and easily. Many people think that, like in the movies, the dead and the new soldiers came and went down the same track. This was not the case. It would have been terrible de-motivating upon the new recruits. The method used to transport the bodies was not as stylish as a Hurst but on the back of a wagon. Owen had to throw the man that died at his feet on the back of a cart and let him be dragged off to lie with the rest awaiting burial. This would be very straining to let him go. The thing that would have been worst, and was what Owen had to do, was to walk behind the cart on their way back. ...read more.

"Some cheered him home, but not as crowds cheer goal." This shows us that the life where he would wear his wounds proud as a token of a small achievement was given in for a life where he mourns for the small achievement and the wound that came with it, rather than the wound that came with the great achievement and left him sad and bare. The reason he joined the war was because of his girlfriend, Meg, and this he remembers was because he'd look "a god in kilts." This is because he is most probably Scottish and they said he would look good in uniform. He said that it was " to please the giddy jilts," this was a Scottish term give to women. The two poems I have covered are very similar. They cover the same points but from different angles and perspectives, this gives us a wider and more in-depth view of Owen beliefs. The first poem seems more like a poem to me, as it is rhythmical and follows through in pattern. Disabled does not follow this pattern although it rhymes it doesn't have the same consistency as the first. The first poem is more graphic and in my opinion is meant to scare the reader. I had trouble keeping the graphic images and imaginations out of my head as they lead your mind to the situation and you feel slightly bewildered by it realism and depth. The second poem is not as leading as the first. You are feeling sorry for the man but not in the same way as in the first. The second poem shows how the sadness and mistakes of a young boy leads to him being bitter and upset. The first poem however is quick and graphic and puts you almost in the horrors of the trench life and this is what Owen was trying to do and he certainly succeeded. David Love ...read more.