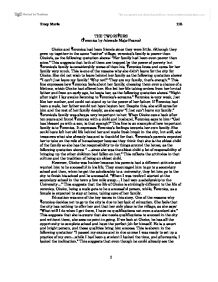 THE TWO RIVERS (Veronica by Adewale Maja-Pearce) Okeke and Veronica had been friends since they were little. Although they grew up together in the same "native" village, veronica's family is poorer than Okeke's, as the following quotation shows: "Her family had been even poorer than mine." This suggests that both of them are trapped by the power of poverty but Veronica's family is considerably worse of than his. Veronica loves and cares for her family very much. This is one of the reasons why she didn't leave for the city for Okeke. She did not wish to leave behind her family as the following quotation shows: "'I can't just leave my family.' 'Why not?' 'They are my family, that's enough.'" This line expresses how Veronica feels about her family, choosing them over a chance of a lifetime, which Okeke had offered her. She led her life taking orders from her brutal father and from an early age, he beats her, as the following quotation shows: "Night after night I lay awake listening to Veronica's screams." Veronica is very weak, just like her mother, and could not stand up to the power of her father. If Veronica had been a male, her father would not have beaten her. Despite this, she still cares for him and the rest of her family deeply, as she says: "I just can't leave my family." ...read more.

If Veronica's expectations were not so low, she may have gone to the city with Okeke, as the following quotation shows: " They are my family that is enough." This line is an example f Veronica's low expectations. She feels that her family is enough and she needs nothing else. Another example of her low expectations is when Okeke comes back to the village after ten years to find Veronica with a child and husband, saying: "God has blessed us with a son. Is that not enough?" this shows that Veronica is still the same after the considerable period that the two had been apart. She is still surviving in the squalor of a village of which Okeke had once lived. Her expectations had always been the same. This also justifies that Veronica is a fatalist. She believes that her life is pre-determined and that her life is set to be in that way. Her future was influenced by the fact that her family seems to have a very low opinion of her. Consequently, she has low self-esteem. This is in contrast to Okeke. Okeke's parents supported him throughout his decisions in life. Veronica, on the other hand, is doubly disadvantaged, as her parents left her alone on her house responsibilities. ...read more.

On the other hand, Okeke was also unfortunate with his life because with his wealth and job, he never had the time for himself and his family. He never had the time for himself and his family. He never had any girlfriend or wife because most of the women were only there for his wealth and money, as the following quotation shows: "All the women I meet are only interested in money and cars." This suggests that life is not always as perfect as you would be expecting when you are a wealthy rich person. Money and material things are not everything, what important is true love and care. After I have read and understood the story, I found it very interesting, exciting, sad and effective. Adewale Maja-Pearce uses tension to keep the story interesting and exciting. She clearly relates the story to the things that was really happening at that time. She expresses the main theme clearly, enabling readers to easily relate to the story. She made it as simple possible, showing two different lives of people from a village. As for my response to the ending, I can say that it is quite sad because Veronica had to die in the end without even experiencing greatness of life. But still, I think that money can't bring true happiness to a person's life without the feeling of being loved and cared of. Tracy Marin 11E 1 ...read more.