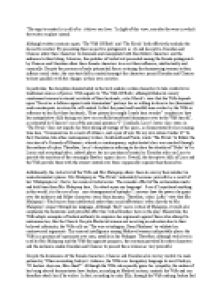 'The urge to control is in all of us: it drives our lives.' In light of this view, consider the ways in which the writers explore control in 'The Rivals' and 'The Wife of Bath'

﻿?The urge to control is in all of us: it drives our lives.? In light of this view, consider the ways in which the writers explore control. Although written centuries apart, ?The Wife Of Bath? and ?The Rivals? both effectively embody the desire for control. By presenting their respective protagonists as sly and deceptive, Sheridan and Chaucer allow their characters to dominate and manipulate both their fellow characters and the audience to their liking. Likewise, the qualities of verbal wit presented among the female protagonists by Chaucer and Sheridan allow these female characters to assert their influence, intellectually and comically. Despite the presence of male patriarchal forces restoring the domineering women to their inferior social status; the constant shift in control amongst the characters permit Sheridan and Chaucer to draw parallels with the changes in their own societies. In particular, the deception demonstrated in the texts enables certain characters to take control over traditional sources of power. With regards to ?The Wife Of Bath?, although Medieval society condemned women to eternal servitude of their husbands; critic Marsh?s view that the Wife depends upon ?Deceit as a defence against male domination? portrays her as willing to deceive her (dominant) ...read more.

Additionally, the verbal wit of the Wife and Mrs Malaprop allows them to convey their intellect in male-dominated spheres. Mrs Malaprop in ?The Rivals? undeniably becomes powerful as a result of her ?Malapropisms?, that is, her comical verbal errors. The comedic effect of the exclamation marks and bold tone from Mrs Malaprop here, ?An attack upon my language!...Sure if I reprehend anything in this world, it is the use of my?nice derangement of epitaphs!?, conveys how the power she gains over the audience and fellow characters stems from humour. Therefore, critics Loftis? view that Mrs Malaprop?s ?Fault arises from intellectual rather than social affectation? refers directly to Mrs Malaprop?s impact through her language. Although ?fault? seems critical of Malaprop, it could also emphasize the humorous and powerful effect her verbal blunders have in the play. Meanwhile, the Wife adopts examples of textual authority to empower her arguments against those who attempt to undermine her, like the Church. Despite Medieval women not receiving an education due to their believed inferiority, the Wife calls on ?The wise astrologien, Daun Ptholome? to validate her controversial arguments. ...read more.

Interestingly, in Sheridan?s era, the notion of Julia breaking off an engagement with Faulkland would have been seen as outrageous by society. In Georgian times, only men were able to dissolve such engagements instead of women; indicating how men remained totally dominant, even as far as ove was concerned. Therefore, while the Wife manages to overcome the limitations of patriarchy; Julia?s inability to control Faulkland represents how the urge to control is often unsuccessful among characters. In conclusion, via an endlessly-shifting dominance between male and female characters; Sheridan and Chaucer effectively encapsulate the complex nature of control. In particular, despite the social restrictions placed on the Wife, her ability to deceive and argue her way into control regardless of opposition represents how her desire for dominance not only ?drives? her life; but the progression of the text. Similarly, the dominance obtained by the lower-class Lucy and the repression of the upper-class Julia indeed embodies the comedic elements of ?The Rivals?, yet symbolises the difficulty of becoming dominant with such gender and social limitations. For this reason, only Lucy and the Wife gain control due to their wise but cunning manipulation of the expectations imposed on them by society and their counterparts in the texts. ...read more.