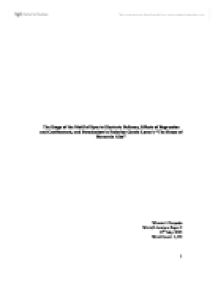 The Usage of the Motif of Eyes to Illustrate Defiance, Effects ofRepression and Confinement, and Foreshadow in Federico Garcia Lorca's &quot;TheHouse of Bernarda Alba&quot;

The Usage of the Motif of Eyes to Illustrate Defiance, Effects of Repression and Confinement, and Foreshadow in Federico Garcia Lorca's "The House of Bernarda Alba" Winniarti Donyada World Literature Paper 2 13th May 2005 Word Count: 1,152 Although the human body functions the best when all five senses work, the sense of sight is arguably the most important of the senses. With that intact, it is definitely easier to get by because one will always be aware of the events occurring around him or her. In Federico Garcia Lorca's "The House of Bernarda Alba", the motif of eyes and sight is prevalent, and is used for various purposes: to show rebellion against a greater force, to show the effects of repression and confinement, and as well as a way of foreshadowing. In the play, Lorca could be said to be establishing that confinement and repression from a greater force can lead to one's end, and through the way he uses the motif of vision, he is continuously reinforcing that idea. Because of the authoritarian figure of Bernarda Alba, a strict mother who confines her five adult daughters within the four walls of her house, subtle rebellion, usually through what they see, is the one method that her daughters use to defy her. ...read more.

(Lorca 171). Here, Magdalena is referring to the moment when Adela was out in the yard and acting rather bizarrely. She is the youngest and most attractive of all the sisters, but because she is not given the opportunity to expose her beauty to the world and is cooped up instead, it can be hypothesized that she has gone slightly crazy. Following her quotation, Magdalena said, "She's the youngest one of us and still has her illusions. I'd give something to see her happy" (Lorca 171). Firstly, due to the fact that she is imprisoned and is not given any freedom, the word "illusions" implies that Adela has certain hallucinations and she sees what is not real, which would also reinforce the idea that confinement has caused her to be slightly insane. The following sentence said by Magdalena states the most obvious effect of Bernarda's incarceration of her children: being confined has led Adela to be extremely unhappy because it deprives her of freedom and therefore the ability to do as she pleases. Later on in the play, Adela confesses her strong desire to break out of the house and be with Pepe, which suggest that the imprisonment set upon ...read more.

This could be used as an example of foreshadow because could have been able to see the trouble that was heading her way. In both instances, the motif of eyes is evident because they could see and were aware of what would happen in the near future. Hence, through the actions of the daughters, Lorca incorporates the motif of eyes and vision to illustrate defiance against a domineering force, the effects of a greater force on the repressed, as well as a porthole into the future. Although this was not mentioned previously, Lorca also emphasized this motif through other things, such as the materialistic issues such as class, wealth and beauty. Bernarda had not let one of her daughters marry because the man was of a lower class than them. Also, despite the fact that others kept emphasizing Angustias' ugliness, she was the only one with the marriage proposal because she had money. Thus through this idea that materialism counts, Lorca could have been suggesting that what is perceived and seen plays a great role in the way people act. In all, the presence of this motif of eyes shows that vision is important in keeping one aware of the events occurring in the environment. ?? ?? ?? ?? 1 ...read more.