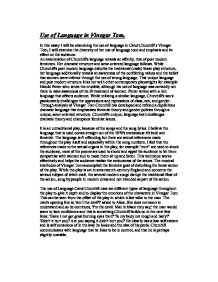 Use of Language in Vinegar Tom. In this essay I will be examining the use of language in Carol Churchill's Vinegar Tom, I will examine the diversity of her use of language tone and emphasis and its effect on the audience. An examination of Churchill's language reveals an affinity, that of post modern feminism. Her dramatic structure and actor-oriented language follows. While Churchill's post modern language disturbs the traditional (male) linear play structure, her language additionally reveals an awareness of the conflicting values and the belief that women were inferior through the use of strong language. This unique language and post modern structure links her with other contemporary playwrights for example Harold Pinter who wrote the crucible, although his use of language was certainly not there to raise awareness of the ill treatment of women. Pinter writes with a rich language that affects audience. While utilizing a similar language, Churchill's work passionately challenges the oppressions and repressions of class, s*x, and gender. Through analysis of Vinegar Tom Churchill has developed and refined a duplicitous dramatic language that emphasizes feminist theory and gender politics through a unique, actor-oriented structure. ...read more.

The use of Language Carol Churchill uses are different types of language throughout the play to give it depth and to display the emotions of the characters in Vinegar Tom. This can be seen from the offset of the play in which Alice talks to the man. The man's opening line is; 'am I the devil?' asked to Alice. She does not seem to understand and so he continues, 'I'm the devil. Man in black they say,' the man would seem to lack confidence and this is something Churchill builds on in the next few lines; 'Have I not got great burning eyes then?' 'Is my body not rough and hairy?' 'Didn't it hurt you? Are you saying it didn't hurt you?' He clearly has a low self esteem and is self conscious of in the way he looks and the size of his p***s. Churchill communicates with language that he likes to be in control, and that he is perhaps slightly unstable. PACKER: Why won't you confess and make this shorter? ...read more.

In your movie dream Do they scream and scream? Evil Women Evil Women" These lyrics are another example from the song that ends Carol Churchill's Vinegar Tom. They are confrontational and force the audience to sit up and take notice, Vinegar Tom is a play that is as much about 1976, the year it was written, as it is about 1676. As a product of the s****l liberation movements of the 1960s and the women's liberation movement of the 1970s, the play takes part in a larger project: the efforts on the part of women to reclaim the stages of spectacle culture from the control of a patriarchal society. In this larger project, we can find liberation of spectacle from its emphasis on "evil women" to an emphasis on the social conditions that would render women evil in the first place and cause popular audiences to take pleasure in their "screams." By making a spectacle of such a society, Vinegar Tom makes visible that which contemporary culture continues to hide from itself: the fact of its repressed and repressive sexuality. In conclusion I feel Carol Churchill has succeeded in generating the response she wanted from the audience by using the language so effectively. ...read more.