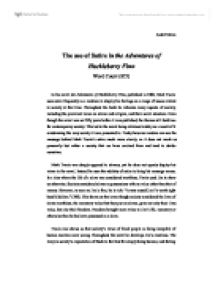 The use of Satire in the Adventures of Huckleberry Finn

Andr� Malan The use of Satire in the Adventures of Huckleberry Finn Word Count (873) In his novel the Adventures of Huckleberry Finn, published in 1884, Mark Twain uses satire frequently as a medium to display his feelings on a range of issues related to society at that time. Throughout the book he ridicules many aspects of society, including the prevalent views on slaves and religion, and their social structure. Even though the novel was set fifty years before it was published, the themes still held true for contemporary society. This led to the novel being criticised widely as a result of it condemning the very society it was presented to. Today however readers can see the message behind Mark Twain's satire much more clearly, as it does not mock us personally but rather a society that we have evolved from and tend to deride ourselves. Mark Twain was deeply opposed to slavery, yet he does not openly display his views in the novel. ...read more.

Huck realizes however, that if he did follow society's expectations and give Jim up to the slavers he would "...feel bad - [he'd] feel just the same way [he does] now" (149). This leads him to disregard the expectations placed on him by society and just "...bother no more about it" (149). In the 1800s, religion was a large part of society. However, society was on many occasions extremely hypocritical in their views on religion. The slave owners would "fetch the niggers in and have prayers" (51), forcing them to become Christians whilst ignoring their own Christian maxim, 'God created all men equal' by treating their slaves as lesser beings. Twain also shows us the futility of society's fanatic attempt to convert everyone to Christianity. This is brought to our attention comically with Jim's view of King Solomon. Jim has been taught "...bout dat chile dat he `uz gwyne to chop in two" (133). ...read more.

The judge decides to reform Huck's father by inviting him over for a day and cleaning, feeding and talking to him. Huck's father takes complete advantage of the situation, and promises to reform. Yet, that very night, he "got powerful thirsty and clumb out onto the porch-roof and slid down a stanchion and traded his new coat for a jug of forty rod"(73). This situation humiliates the law of that time, and shows the reader how ineffectual and gullible it actually was. Today we see the humour in Twain's satirical portrayal of Nineteenth Century society but at that time even this subtle mockery of their culture angered a number of people greatly. Critics today feel that he was not outspoken enough against the atrocities of that time, but if he had been more outspoken, society might have completely rejected his novel. Therefore satire was the perfect medium for Twain to present his views to the world without upsetting the masses. Thanks to this, we can today read about the wrongs of society at that time and endeavour never to repeat them. ...read more.