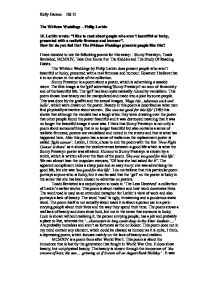 The Whitsun Weddings - Philip Larkin 19. Larkin wrote: "I like to read about people who aren't beautiful or lucky, presented with a realistic firmness and humour". How far do you feel that The Whitsun Weddings presents people like this? I have decided to use the following poems for this essay: - Sunny Prestatyn, Toads Revisited, MCMXIV, Take One Home For The Kiddies and The Study Of Reading Habits. The Whitsun Weddings by Philip Larkin does present people who aren't beautiful or lucky, presented with a real firmness and humour. However I believe that it is not shown in the whole of the collection. Sunny Prestatyn is a poem about a poster, which is advertising a seaside resort. The first image is the 'girl' advertising 'Sunny Prestatyn': an icon of femininity and of the beautiful life. The 'girl' has been systematically ruined by vandalism. This poem shows how beauty can be manipulated and made into a joke by some people. This was done by the graffiti and the s****l images, 'Huge t**s...tuberous c**k and b***s', which were drawn on the poster. ...read more.

Toads Revisited is a sequel poem to toads in 'The Less Deceived' a collection of Larkin's earlier works. This poem is about realism and how work dominates lives. The word toad is used as an extended metaphor for Larkin's view of work and also portrays a lack of beauty. The word 'toad' is ugly, threatening and a ponderous static word. The poem itself is not actually about toads it is about a person sat in a park-envying people about their lives and the way they spend their time. The poem shows a real lack of beauty and does show luck, but not in the sense that someone is lucky. Luck is shown without realising it, the person envying people, has a job and probably a place to live, whereas the '...characters in long coats deep in the litter-baskets-....' Are probably homeless and aren't as fortunate as the on looker. This poem does not in my mind contain any element, which could be classed as humour as it is quite, I think, a depressing poem, which focuses mainly on the lack of beauty and realism. ...read more.

In the end the person who ruined their eyes due to their love of books finishes by saying 'Books are a load of c**p'. I think that this shows how some people feel they will be treated for their specific hobby. This poem therefore shows the lack of beauty people can go through and also the realism of which people go through regarding their lifestyle. I do not think that this poem has any sense of luck as the 'man' describes himself as a bit of a Jekyll and Hyde character. I think that Philip Larkin's presentation of his poems regarding humour and realistic firmness is not shown in every poem from The Whitsun Weddings collection, most of his poems do contain an element of realism, however, humour does not usually appear in his poems. Generally Philip Larkin's poems do contain, or are about, people who aren't beautiful or once were. I do agree to an extent that Larkin's poems present people in his poems as unlucky and not beautiful and usually with a realistic firmness, however regarding humour I am not sure, as only a few of his poems do. Kelly Hanson DS 11 ...read more.