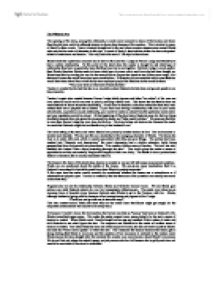 The Withered Arm The opening of the story, among the milkmaids, is much more innocent in terms of the tension and terror than the plot turns out to be although tension is shown here because of the mystery. This is similar to many of Hardy's other novels. Terror is mainly brought out in the end when everyone passes away except Rhoda who may be the most evil character in the plot. In most of Hardy's short stories written he uses unexpected twists to create terror and tension. This may link to the sort of life style in those times. Rhoda wants her mysterious unnamed son to observe the new Mrs. Lodge as Farmer Lodge and Rhoda have had a certain relationship. At this point of the short story the reader is bought to ask what type of relationship they had; we gradually learn that they have had a son together. Gertrude Lodge is much prettier than Rhoda, therefore Rhoda wants to know what type of person she is and how she had been bought up. Rhoda does this by sending her son for the second time to inspect her hands to see if they were rough, if so that would mean she would have done some work before. If Gertrude did not work this would mean that she would have been raised from a rich family who employed people like Rhoda to do the work for them. ...read more.

When Rhoda went, Trendle bought out an egg and cracked it into a glass of water and told Gertrude to see what figure she saw. The response was inaudible to the reader so another sense of tension is created. Also when Gertrude came out of the conjuror's house, she did not want to speak to Rhoda and said she "cares not to speak," of what she saw. This enhances the tension because the reader gets a strong feeling that Rhoda is involved, and the question of her innocence is reduced in the readers mind. Rhoda leaves the farm straight after the incident; this creates even more tension about Rhoda's innocence. We do not find out where she actually goes; we just presume she has left because she is guilty and does not want to be convicted of the crime's committed. In the short story we see a defiance of social principle. Gertrude, a rich upper class woman, is starting to mix with lower class people like Rhoda Brook, Trendle and a Hangman. Rhoda Brook is a very poor woman and is employed to do other people's work, as she is a maid; this shows that she is lower than Gertrude as her husband has employed her. Conjurer Trendle is associated with potions and magic, which in those days is known as witchcraft. You would be placed in the bottom of society if you were slightly interrelated with it. ...read more.

This leaves us with the two main character, Rhoda and Gertrude. It could be either one of them Rhoda at the end admits to being involved with Satan. But this is not shown in form of action in the text so she could have just meant the dream at the start of the short story and said the involvement with Satan in the spur of the moment. "This is the meaning of what Satan showed me." This also implies that Satan showed her that Gertrude is evil. Gertrude can also be seen as evil as she was the one who appeared in the dream in the first place. She could be involved with witchcraft because it's She is the person who actually got hit down. Also the fact that she mixes with hangmen and Trendle show the fact she is going to the evil side of society. The reader does not know which one is the real source of evil even though Rhoda is the only one to exist this is left in suspense which creates tension. In conclusion tension and terror are seen in all chapters of the story; each one leaves a question unanswered so tension is easily created. The main section of terror and tension was the fact that everyone dies except Rhoda who carries on her life in the milk shed. The short story is ambiguous because nothing is definite and the reader must use their imagination to predict the future in each part of the story. This is the basis of tension and terror throughout the short story. ...read more.