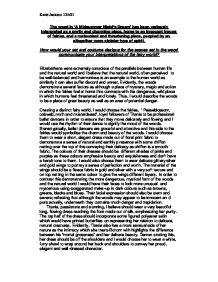 The wood in 'A Midsummer Night's Dream'has been variously interpreted as a pretty and charming place, home to aninnocent troupe of fairies, and a malevolent and threatening place, peopled byan altogether more sinister type of spirit.

The wood in 'A Midsummer Night's Dream' has been variously interpreted as a pretty and charming place, home to an innocent troupe of fairies, and a malevolent and threatening place, peopled by an altogether more sinister type of spirit. How would your set and costume designs for the scenes set in the wood communicate your interpretations of the fairy world? Elizabethans were extremely conscious of the parallels between human life and the natural world and I believe that the natural world, often perceived to be well-balanced and harmonious is an example to the human world as similarly it can also suffer discord and unrest. Evidently, the woods demonstrate several factors as although a place of mystery, magic and action in which the fairies feel at home this contrasts with the dangerous, wild place in which humans feel threatened and lonely. Thus, I would describe the woods to be a place of great beauty as well as an area of potential danger. Creating a distinct fairy world, I would choose the fairies, ' Peaseblossom, cobweb, moth and mustardseed', loyal followers of Titania to be professional ballet dancers in order to ensure that they move delicately and flowing and I would use the rhythm of their dance to signify the mood of the woods. ...read more.

This emphasizes both a butler figure that is loyal and accepts orders from his master and the comical side to his character as he doesn't always do as Oberon orders and has his own independence at times to do as he pleases and get up to mischief. In order to set the scene as a wood, as I feel that the woods are neither a pretty and charming place, nor a threatening, overpowering place but a mixture of the both creating a sense of mystery and magic, I would not have a detailed set allowing the audience to assume one type of wood. Allowing the audience to use their own imaginations, I would create an atmosphere of tension and suspense by having the set mainly in darkness when the characters are having their 'night time' on stage but with spotlights concentrating onto the stage as beams of light representing the intensity and depths of the woods as though the intervene of trees only allows little light to seep through the cracks. Night is also an important theme in the play as it is a time in which humans sleep and would be lost and frightened to interact during the darkness however it is a time in which magical beings roam and embarking on danger, Oberon and Puck are able to manipulate emotions and lose their true identities. ...read more.

In amongst this I would have flowers of all different colours woven into the branches and stems of the large flowers to create an image of natural splendour. To create the sense of invisibility of Oberon and Puck I would have a large curtain pulled across the back of the stage allowing the figures to stand behind this and their shadows to appear on the other side so the audience can see their movement. When Puck first appears in the woods I would show him behind this curtain jumping around and sneaking about as though in the lookout for mischief and to find someone to make a fool of. When Oberon also first enters the stage I would place him behind this curtain at first in order to imply to the audience that the characters are invisible and have a sound effect of a synthesized tone which is played when the invisible characters are on stage which will stand out. Once the audience have become accustomed to the shadows of the characters they can then appear in front of the curtain but the synthesized tone will continue to distinguish their magical presence from the other characters. ?? ?? ?? ?? Katie Jackson 12MH ...read more.