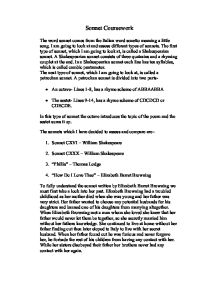 The word sonnet comes from the Italian word sonetto meaning a little song.

The next sonnet that I am going to look at is "Phillis" by Thomas Lodge. In this sonnet Thomas Lodge talks about his love for a woman called Phillis. In this sonnet Thomas Lodge uses many metaphors to describe Phillis. The rhyme scheme of this sonnet is ABABCDCDEFEFGG. This sonnet is full of hyperboles as Thomas Lodge greatly exaggerates Phillis' features. In the sonnet Thomas Lodge tells us that Phillis is more beautiful than the sun and has hair shinier than gold. He goes on to compare Phillis to a Goddess. He places Phillis on a pedestal. "And Herbe spic'd hir necter with thy breath:" In the last two lines Thomas Lodge begins to focus on himself and says that his faith is greater than any of Phillis' features. The rhyming couplet exposes Lodge's insincerity as he focuses on himself instead of the object of his supposed affection. "Yet naithelesse tho wonderous giftes you call these, My faith is farre more wonderfull then all these." I have noticed that throughout the whole poem Thomas Lodge has not once mentioned Phillis' personality which shows us that his love is not true love and he is merely infatuated with Phillis because you cannot love someone only because of their looks. Now I am going to look at the sonnet CXXX which is the complete opposite to Thomas Lodge's sonnet. ...read more.

Also another similarity is that every sonnet I have looked at apart from sonnet CXXX have hyperboles. I feel that sonnet CXVI best portrays true love and I agree with most of Shakespeare's theories. I think that he is correct when he says that true love does not alter or change over time. I feel that there is a clever use of hyperbole in this sonnet as it makes Shakespeare's theories more believable. I do not think that the sonnet Phillis gives us a true indication of what true love is as true love is not based on appearance. In "How Do I love thee?" by Elizabeth Browning I feel that there are too many hyperboles and after a while they begin to lose their meaning. However when she compares the love for her husband with the love for her family it shows us how much she does love him. In sonnet CXXX Shakespeare that even despite his mistress's looks he still loves her, which I feel is true love. So in conclusion I feel that the sonnets do present contrasting views on the nature of true love as the authors of the sonnets obviously have different ideas of what true love is. Thomas Lodge's sonnet leads us to believe that he thinks true love is based on appearance while Shakespeare's sonnet tells us the exact opposite. By- Steven Montgomery ...read more.